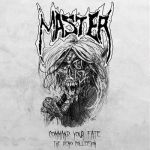 I’m sure every reader of Voices From The Darkside knows MASTER are pioneers of heavy music, mainly Death / Thrash Metal, having been formed in the early years of the scene. "Command Your Fate – The Demo Collection" is a compilation that features three releases: the "Follow Your Savior" 2001 EP and two demos, "Everything Is Rotten" (2005) and "Final Word" (1995). Let’s analyse this. The three tracks of the "Follow Your Savior" EP are perhaps more mid-tempo than the rest, yet with all the MASTER sound trademarks. Straight forward, aggressive music with well-composed, catchy riffing and Paul Speckmann’s characterisic voice on top of it singing about injustice and corruption. The first two songs made it to the 2002 album "Let’s Start A War" in very similar versions. The next four songs, off the "Everything Is Rotten" demo, were later recorded for the "Four More Years Of Terror" 2005 album. And they sound fucking awesome, fast and dynamic, certainly because of the inclusion of kickass drummer Zdeněk Pradlovský. I must say "Four More Years Of Terror" is one of my favourite MASTER albums and the drums are totally killer! Speckmann’s emigration to the Czech Republic had the advantage of him forming a trio of formidable performers with Pradlovský and Alex Nejezchleba (and also, for me personally, of subsequently often touring Europe allowing me to catch them live with some frequency). So this particular demo material is certainly the best produced in the compilation and also my personal favourite part. On the other hand, it is probably a bit redundant in case you own the aforementioned album, as these versions, too, do not differ much from the full-length. As for the three songs from the "Final Word" demo, they are actually really great and with a bit more variation than usual for this band… however, the recording and production is inferior (as expectable from a 1995 demo). One of the songs was later recorded for the "Faith Is In Season" 1998 album. Probably this compilation will only be really appealing for the most die hard and completist MASTER fan, but if it reaches your hands, truth is it’s filled with great music from start to finish. Available in digipak and gatefold LP, with minimalistic but suitable cover artwork, including lyrics and liner notes by Paul Speckmann, "Command Your Fate – The Demo Collection" sits fine on any Metalhead’s shelf. MASTER are an incredible Metal band and these tracks are definitely a reminder of that. Find out more at: www.facebook.com/master-18521536017, www.animate-records.com