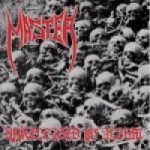 I honestly never thought that this so much traded recording over the years which has incontestably influenced a bunch of Thrash / Death acts on this planet back at that time would finally surface officially, but From Beyond Records has done it. All bloody fuckin’ power to them for such a miracle! If you are familiar with early MASTER, then you already know this recording and you do know how deathly it is over the course of the seven tracks, yes deathly heavy to the bone, a barrage of relentless, ripping riffs and leads courtesy of Mittelbrun, a rhythm section which leaves you breathless from the first seconds with Bill Nychau “Schmidt” pounding his drums like crazy (after all he created a somewhat unique style used by many later – the famous MASTER beat) and Speckman torturing his bass, the whole thing being surrounded by ultra venomous vocals from the same Speckman. Seven classic tunes non stop with ‘Master’ and ‘Mangled Dehumanisation’ (a DEATH STRIKE tune re-recorded) being my all time faves, two deathly monsters! Their material could be described more or less a mixture of early SODOM, early DEATH, early VENOM and POSSESSED. For those who know MASTER only through their self titled album from ’90, well it’s quite close sounding as it was the same line up but the ’85 recording is undoubtely more raw, crude and savage. As for the others being only familiar with their later recordings, it’s simply not the same MASTER as Paul Speckman never managed to recapture that unique style of songwrting despite its numerous attemps through a nearly 20 years career. As a bonus, four tracks taken from ’91 and ’93 demos have been added but while they can sound enjoyable to a person who doesn’t look for something ass kicking, to me they sound boring and utterly forgettable but I don’t care, all which counts is the ’85 recording. Get this album at any price because that ’85 album deserves the cult tag and a place in the pantheon of Thrash / Death Metal for sure. It also exists on vinyl for the collectors. Essential! E-mail: info@displeasedrecords.com Website: www.displeasedrecords.com.