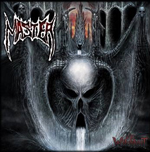 Hell yes! One of the most eagerly awaited albums of 2013 finally arrives! The 12th full-length offering by MASTER is probably the longest in their illustrous discography and marks a new chapter in the band’s history since they’ve signed to the German F.D.A. Records, a label specializing purely in old school Death and Thrash Metal and the one which should really help spread the new MASTER opus across the world! So what changed since their last offering "The New Elite" which had me foaming at the mouth? The band has become an even more tighter unit and it’s no wonder, bearing in mind that they are playing lots and lots of gigs. There’s hardly a month without MASTER crushing the maniacs somewhere on the stage and it definitely is reflected on the new songs. The opener ‘The Witchhunt’, following ‘Plans Of Hate’ and ‘Another Suicide’ set this album on fire. Fast, infectious and catchy as fuck, packed with razor sharp riffs and a galloping rhythm section reaching blistering speeds layered with bile spewing, venomous, raspy vocals, it delivers everything you came to expect from MASTER – plus it comes at unrelenting intensity. The fourth track ‘Waiting To Die’ slows things down a little bit, grooving along the traditional mid-tempo beat showcasing an excellent sense of the band’s dynamics, but then ‘The Parable’ puts things back into the higher gear and presses at it pretty much till the very end with the exception of the slow middle part in track No.7 ‘Remove The Clowns’ and the weird ending of the album’s longest song ‘Manipulated To Exterminate’. "The Witchhunt" has a bit fatter and punchier production than "The New Elite", it sounds massive yet still retains all the dynamism and subtleties (which here aren’t that many, haha)! It’s also worth mentioning the mind shattering drum attacks by Zdenek Pradlovsky, he really shines here rolling around those rhythms, beating the shit out of his drums and locking in the solid groove with Paul Speckmann. Alex Nejezchleba (guitars) also proves his worth thrashing out some blistering short Thrash solos in the vein of old SLAYER and KREATOR and slicing away one catchy riff after another. This is truly a band effort, nothing feels forced, it’s a rollercoaster ride along on the punked up Death Metal railing. MASTER never denied their Punk influences and on this album they sometimes go into the realm of THE EXPLOITED intensity, while Speckmann goes on verbally bashing corrupt politicians against the wall, pointing humanity’s weaknesses and vices in his not-so-subtle style! So here you go… MASTER again has come out at the top of their game! Another blood rushing shot of pure Death Metal adrenaline. A MUST! www.master-speckmetal.net, www.facebook.com/pages/master/18521536017, www.fda-records.com