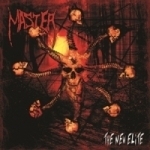 (Picking myself from the floor…) Uffff… now this was some mad thrashing session alright! Let me take a breather here… two years after the menacingly dark "The Human Machine", MASTER shows no intention of slowing things down and comes at you with the fiercely slashing "The New Elite". Paul Speckmann & Co. still possess all the rage and fire to deliver a bullshit free scorcher! It kicks you in the nuts right from the get go and continues to do so throughout the whole album! I know, it’s a kinda lame and lazy comparison, but one I always wanted to make – MASTER is like MOTÖRHEAD of Death Metal, period! Most casual fans know of their first two classic albums and kinda overlook the new era of MASTER which started since Paul Speckmann moved to Czech and recreated the band again. With this new lease of life they’re getting stronger and stronger as "The New Elite" proves again just like the previous 3 albums, starting from "Four More Years of Terror", did! Simple but sharp as a shark’s teeth riffs accompanied by a solid and strong rhythm foundation, bowel moving bass and raspy, snarling vocals suck you into a vicious maelstrom of crusty Death Metal with slight Thrash overtones bringing some resemblance to ABOMINATION. The production is raw yet very clear and distinguishable, very bass heavy which is a bit different from "The Human Machine" where it was more straightforward and dark. It cuts straight to the point and reminds me of VENOM’s "Fallen Angels" somehow. The title track, the following ‘Rise Up And Fight’, ‘Smile As You’re Told’, ‘As Two Worlds Collide’ and the closing ‘Twist Of Fate’ are among my favourites here, all bearing trademark MASTER stamps. If anything, this album is even more angry and aggresive than the previous ones. The band sounds fucking tight here and Paul Speckmann without any doubt whatsoever is one of the best Death Metal vocalists in the world – the accentuation of words, the delivery and that venomous snarl blows out of the water all the pretenders… and to think he has started the genre and been doing this for nearly 30 years – that is damn impressive! If you’ve been up to date with MASTER’s work, then "The New Elite" won’t surprise you that much, they are not pulling MORBID ANGEL tricks on you, so rest assured – the quality, delivery and raging aggression and anger is still there in a pure undiluted MASTER way! So, to sum it up and make things clear – buy the CD or the vinyl, because this is undoubtedly one of the best classic Death Metal albums of the year 2012 and a freely downloaded file is just a big no-go. You must support MASTER if you call yourself a Death Metal fan! Not out of the obligation or any other bullshit reason, but because "The New Elite" kills, then picks you up and kills again! And Paul Speckmann should finally write his book too! www.myspace.com/masterspeckmann, www.facebook.com/#!/pages/Master/18521536017