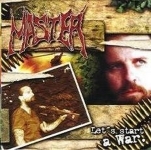 Paul Speckmann played a key role in the Death Metal formative years, with bands like TERRORIZER and ENTOMBED acknowledging him and MASTER as a major influence. And both MASTER’s first effort and the one and only DEATHSTRIKE album could be considered classics even today, thanks to their intensity and to a simple but effective song writing style. Unfortunately, Speckmann’s career has spiralled down throughout the years, because of bad business decisions (too much records issued in a very short time), and the constant struggle Paul has to fight to simply exist as an artist. I admit I follow his career only remotely after the two aforementioned albums, until today and this “Let’s Start A War” release. Even if I have total respect for Paul Speckmann, I can’t view this new offering as an achievement, far from that. MASTER have never played Death Metal in the pure sense of the term, rather a form of down tuned heavy Thrash, and this style is to be found again here, no problem with that. But I am sorry to say that “Let’s Start A War” is an anaemic album, without stamina. A shame really when you consider how much energetic sounded the first MASTER album, and when I heard the band playing a lousy Blues tune (‘Purchase A New Handgun’) I understood at once things have gone too far. In fact, on the 11 songs on offer here, four only could be salvaged from this wreckage of an album. ‘Dictators’ somewhat rekindle with the glorious DEATHSTRIKE days, while ‘Cast One Vote’, ‘American Freedom’ and especially ‘Disturbed’ clearly sound like classic MASTER tracks. The rest is easily forgettable, to begin with the awful ‘Miss Misery’ and ‘Watch What You Wish For’ songs, the writing process was obviously rushed here to say the least and to stay polite. The overall production gives way to a lot of power and dynamic to no avail though, just listen ‘Command Your Fate’, a song obviously planned to highlight the crunchiness of the guitars, the result is a poor buzzing instead of a biting crunch. Lyrically, Paul Speckmann continues with his anti-American crusade, but whatever the level of validity of his political stances, I hate preaching in music as I consider myself able enough to think on my own, so I will not discuss that any further. From all of the above you understand this album is far from being a top priority purchase, I hope Paul will “open his eyes and clear his fucking mind” to come up with a the classic I know he is still able to write, because the war promised here has turned out to be a mere skirmish. 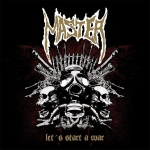 “Let’s Start A War” is the fifth full length album of the Chicago based pioneering Death Metal band MASTER. It was originally released in 2002 by the German label System Shock and it’s the first album that marks the entry of this legendary American band in its Czech phase. Here we have an album reissue recently released by the German label Animate Records; a new version that also includes the “Follow Your Saviour” EP from 2001 as bonus tracks. A total of 13 tracks and a NAZARETH cover of the classic song ‘Miss Misery’ for almost 50 minutes of genuine old school Death Metal. Ok, everybody knows Paul Speckmann: the mastermind behind cult bands such as MASTER, precisely, ABOMINATION, DEATH STRIKE, FUNERAL BITCH etc. In terms of Death Metal and Thrash Metal he is a sort of Lemmy, due to his distinctive raspy voice and his iconic presence. As I mentioned earlier, “Let’s Start A War” is the first album of the Speckmann’s partnerships with members of the Czech Death Metal scene. In this particular case Paul (bass and vocals) formed a power trio line-up with Petr Kryštof (guitars) and Libor “Skull” Lebánek (drums), both from the mighty KRABATHOR. And since I love MASTER and KRABATHOR, yeah, this album is a killer example of old school Death Metal with Thrash, Punk, Hard Rock and classic Heavy Metal influences. This a truly honest album of simple and devastating Death Metal without compromises or ultra technical stuff. Here we have tons of catchy riffs, killer melodies and a powerful guitar distortion. The album is quite varied with the majority of the songs in the vein of classic MASTER stuff, others with a more pronounced KRABATHOR touch and a couple of surprises like ‘Purchase A New Handgun’ (a slow Hard Rock / Blues track) or ‘Watch What You Wish For’ (a brutal blastbeat assault, something unthinkable in their early years). The drumming is solid and carefully studied with the typical D-Beat accelerations and the galloping double bass à la MASTER. Paul’s distinctive and raucous vocals are one of the highest point of this album, whose lyrics are centered on relevant social and political topics, as always in MASTER’s discography. In conclusion, “Let’s Start A Watch” is a pretty good album from a competent and iconic band. More info at www.facebook.com/therealmasterofficial, www.animate-records.com