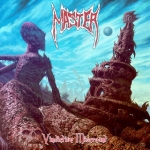 Paul Speckmann is MASTER. This band is his vision, and it has always been like that since 1983. MASTER’s legacy is without doubt one of the biggest for extreme Metal. The Swedish Death Metal sound owes MASTER their more distinctive details. And MASTER has mostly kept their sound intact in all the years. While one can say that they tend to sound a lot alike in their last albums, they have also been creative enough to still have good music under their bullet belts. MASTER’s sound has not changed that much, it is basically the dirty kind of Metal that has a lot of Punk and Hardcore attitude translated into extreme Metal. Their lyrical side has never been far away from what they have been doing all these yeras, critizicing today’s “modern” society and the way it works. MASTER keep most of their songs on this album on the faster upper-tempo side, with that characteristic d-beat sound that they use with such ease. Paul’s vocals are sometimes an acquired taste, yet the VENOM he spews is in there. Of the latest albums they have released, I can say without doubt this is among the best they have done, even if many songs keep a similar line, they are all headbangers to throw a fist in the air to and the devil horns sign. The production values on this one are also very good, fitting the style of the band, avoiding a too modern sound yet raw enough and in your face for that old skull aura. Released on one of my favourite newer label, India’s Transcending Obscurity, with a killer artwork and done with passion many other labels have forgotten, this is a must for fans of Death / Thrash. It is MASTER and that should be enough for Metalheads to follow his commands! More information at: www.facebook.com/therealmasterofficial, https://tometal.com