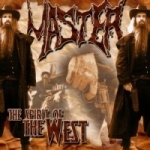 MASTER
The Spirit Of The West
(System Shock Records)
40:09min

Oh dear – I don’t know whether I should be liable of such a review actually. MASTER are a living classic, and this cannot be ignored because it is a fact. The act has been active since the beginning of the 80s – and they are still around. I must say that I do not consider myself a big MASTER fan. I have all their releases at home, and I bought these when they were actually released. BUT I never really liked them to be honest – nevertheless I am very much aware of their important role in the Death Metal scene and beyond. The only song I really liked was ‘Cut Through The Filth’ which was exclusively done for the second "Death Is Just The Beginning" sampler in the 90s. Anyway – "The Spirit Of The West" is the new album. The production is cool… I like the rawness, the old school spirit. The bass-guitar sounds great as well – like a fucking punch. All the components are great sound-wise. The only thing that irritated me are the drums that are a bit untight every once in a while. The music? Hmmmm – it is typically MASTER. Very straight, simple and primitive. Paul yells out and complains about shit he feels pissed off by. Basically the songs are rather mid-paced, heavy and sort of crusty if you know what I mean. ‘The Gold Mine’ starts off with a sequence that reminds me of PANTERA concerning its groove and at the end of this record you will find a cover-version of a Johnny Cash classic: ‘Ring Of Fire’ with some funny original samples like trumpets and the master himself (I guess). The concept of this effort deals with the emotions, motivations, interests prevalent during the adventurous times of the American colonization. This contents-related concept is sort of shallow of course… glorifying the good ol’ days, pistols, whiskey and coyotes as the title track states. This is naive and superficial, of course… but you don’t purchase a MASTER CD in order to learn something valuable and critical about American history, do you?! The booklet looks funny as well – everything corresponds to an old-fashioned Western concept. I rather have a laugh about such things – but there we go, this is MASTER we are talking about. This record doesn’t touch me at all to be honest, I think it will join the other releases in my cupboard, keeping them company. On the whole this record sounds solid to me, good production, the musicianship is bearable as well – but I am convinced that MASTER is one of the numerous bands that live on the basis of their past significance in the scene. That’s why they are taken heeds of nowadays. MASTER do not impress me one bit emotionally, musically, lyrically… that is a… personal… fact. But – of course – due to their activities so far in the scene they are a relevant and integral part of the underground. Still – this doesn’t make up for releases that simply are boring and mediocre – sorry about that, Frank… (hey, no need to excuse here Mr. Cthulhu – tastes are different! I just wonder why you actually own all of the MASTER releases if you don’t like them and why you even were interested in reviewing this new one then… – Frank) (Well, chief … I was keen to review this one because, as mentioned in the review, MASTER are an integral part of the scene and I will always buy their CDs because they are a part of my musical socialization so to speak. It is a bit like a tragedy really – since I heard ‘Cut Through The Filth’ I was curious whether MASTER would do something comparable again – but they never did, which is sad. – F.Cthulhu E.). 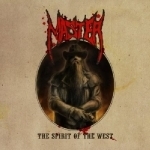 MASTER
The Spirit Of The West
(High Roller Records)
40:08min

Each one of us precious snowflakes has their own way to blow off steam so I don’t want to assume you end a work week pouring a beer on your head and jumping into a punishing pit of thrashy-death catharsis, but you probably do. I can’t blame you really, there’s nothing quite like being pissed off and voluntarily surrounding yourself with other pissed off people while being pissed off together, though constructively while listening to pissed off music. Over a prolific career, MASTER has demonstrated that they’re committed to the thrashier, brutal and more textured style of Death Metal even when they want to spread their wings a little bit. Committed they are indeed as "Spirit Of The West" proves to be one of the band’s more "experimental" releases. Picture this, you’re in the scenario previously described, perhaps at a live show. You’re throwing your pit mates around to some menacing riffs, thunderous drums and some tough sounding vocals and then suddenly, what’s this? A groovy bass line that’s dare I say, jazzy and a drastically different guitar solo that sounds much more LED ZEPPELIN than VENOM and you stop and think to yourself… well I guess you don’t stop nor do you think to yourself because it’s been discretely inserted for your own personal awe and enjoyment. It’s that slick. Kind of like a "spoon full of sugar makes the medicine go down" kind of situation. And it does go down indeed. The song with the jammy interlude I am referring to is the second track entitled ‘The Serpent’s Tongue’. That groovy detour is just a sign of more refreshing things to come in this unlikely Thrash / Death album. Perhaps a reason why these interludes are so welcomed and seamless, is that MASTER has endured in their genre without getting carried away on production and technical for-the-sake-of-it styled arrangements, a fate that has befallen many other Death Metal acts over the years. MASTER’s approach on this album is to branch out safely, taking small steps to explore various stylistic elements, a departure from the everyday. Their sound is tangible, the production is minimal and that human touch element is flawlessly preserved. ‘Rights Of Life’ is a real anthem type of song while the riffs on ‘Sign Up’, ‘The Gold Mine’ and ‘The Perfect Family’ are downright misanthropic (that’s a good thing). If you give it a close listen, there are lots of little treasures planted all over this album from the drum-led ‘Long Knives’ to the tremolo of ‘Pistols, Whisky, And Coyotes’; there is a lot to explore here. The album ends with a cover of Johnny Cash’s ‘Ring Of Fire’, which perhaps is a testament to the album’s namesake or maybe just for no other reason than this is a fun cover song (which it is). It’s a healthy reminder of the overall theme of this album, which, I suppose, is about not taking things too seriously. A friendly reminder to "lighten up" but never let the music become any less heavy. And mind you it is plenty heavy. Even if you don’t consider this a western inspired or experimental album, it’s still a damn good one nonetheless. www.master-speckmetal.net, www.facebook.com/pages/master/18521536017, www.hrrecords.de