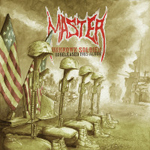 A good deal of years ago, Displeased Records’ fucking cool imprint From Beyond Productions released MASTER’s "Unreleased 1985 Album" for the masses, or at least the few who were fast enough and gave a fuck about Speckmann and the first MASTER album recorded. An album that got shelved until five years later when Nuclear Blast got the release on track, with a quite different tracklist and mixes, but still a damn good album. Though this bastard is the real deal, now available again courtesy of the good folks at Vic Records. Now it has been named "Unknown Soldier: Unreleased 1985 Album" and to be honest, it has been years since I’ve been listening to the From Beyond release and I haven’t been arsed to dig it up from the piles of moving madness, that still hunts my music collection, but it seems like it is the same mix and master, been made public again. Earlier this year, or was it last year, "The Speckmann Project" was released with some tracks from this recording on it, though in a different master version, as this one is quite louder and more intense which suits the madness from the Death Metal legends, even though the other version is quite charming as well (well, that’s two completely different recording sessions anyway, Anders – Frank). Musically MASTER was way ahead of their time back in the mid 80s and for that sake up until the mid 90s, though it is only a few years back that they really started to be praised for their music. I know the beginning was a bit back and forth for the different line-ups lead by Paul Speckmann. We had MASTER, ABOMINATION, DEATH STRIKE and FUNERAL BITCH which all crossed over member- and music / songwise, though the quality has always been present and delivered, though 25 years + was what it needed for the dear Mr. Speckmann to get his dues. But damn, listen to this album and see how many bands and tracks that have been inspired from these 8 tracks. It is quite impressive. 8 tracks yes, track 9 and 10 are demo recordings from 1991 and track 11 ‘Cut Through The Filth’ is from "Death Is Just The Beginning" from 1992, but what a track! I don’t really know what instrument the synth is trying to sound like, but it it is working. Perhaps the most atmospheric and chilling track MASTER ever has done, even though the drum sound is quite weak! I could babble on forever about MASTER, the other related bands and this release, but let me leave it at this: this is Death Metal history in its purest form, looking aside the mastering of the old recordings, but still, most of these tracks were recorded in 1985, written a bit earlier, and still more than relevant in today’s Death Metal scene. That’s freaking grand, when speaking of a band that many always have ignored! For more information check out www.master-speckmetal.net, www.facebook.com/pages/master/18521536017, www.vicrecords.com