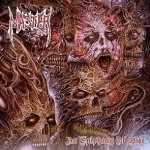 My dear MASTER… always kept itself loyal to its roots, to whatever feels is right to continue the path traced for over 2 decades. There are times and waves moving people and bands to new horizons, making them to take risks and add new ingredients to their recipe. MASTER is one of those bands that never really cared for changes or trying new stuff, yet somehow they have managed to keep themselves under the umbrella of bands that have loyal fans and get new fans every time they put out a new record. This is going to be a short review, because there’s not much to say about this record that will make a big difference compared to the previous records of the band, but I’ll point some important aspects of this new chapter of the band entitled “An Epiphany Of Hate”. First thing to notice is the artwork of the record, this one goes back to a more traditional liking of the band, bringing back memories of their 90s albums rather than the latest ones. The music is the same thing you would expect from a MASTER album, basic and in your face Death Metal the old school way (is there any other way?), packed with lots of rhythmic sections and that tight drumming parts, but this time the guitar solos are a bit more complicated and fit well with the transition of the songs, making the album a bit “fresher” than the previous 3 offerings. There are also a few groove sections paying tribute to early SEPULTURA. Otherwise “An Epiphany Of Hate” is your traditional MASTER record, I mean, let’s be honest, if you buy a MASTER release it’s because you don’t expect surprises, you expect the same quality and execution that the band has developed so far, not changing a bit, not experimenting, because it’s not needed. Get this new old classic from MASTER at www.master-speckmetal.net, www.facebook.com/pages/master/18521536017, www.fda-records.com