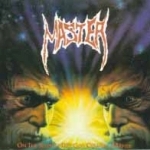 If I remember correctly "On The Seventh Day God Created… Master" was actually not the second, but already the third MASTER full length (not counting the unreleased 1985 album here)… The material that originally had been written for album number two and of which several songs already found their way into the band’s live performences way back in 1990 (see DVD part of the "Master" re-release) ended up being released as the SPECKMANN PROJECT album later on. Nuclear Blast obviously didn’t consider songs like ‘Fallen From Grace’, ‘Rabid Anger’, ‘Remorseless Poison’ or ‘Live For Free’ strong enough to be released as a MASTER album and so the band ended up doing a way more Death Metal infected release: lower vocals, typical Morrisound Death Metal guitar sound, Paul Masvidal (CYNIC / DEATH) instead of Chris Mittelbrun on guitars, and backing vocals by OBITUARY’s John Tardy on ‘Submerged In Sin’ and ‘Latitudinarian’. All in all certainly a great record that perfectly fitted into the whole Death Metal boom of its time, but on the other hand also the most untypical MASTER album. Just like the re-release of the debut full length, also this one comes up with a rather disappointing booklet (it only features the lyrics and the same liner notes as the debut) and two more bootleg type live shows on the bonus DVD: Groningen 1992 (very good quality here; featuring MASTER already as a fourpiece and a shaved Paul Speckmann, who often sounds like WHIPLASH’s Tony Portaro during "Power And Pain" / "Ticket To Mayhem"!) and Heemskerk 1993 (also pretty good in its quality) – total playing time for both approximately 110 minutes. So, if you’re a dedicated Paul Speckmann supporter or simply missed out on the original CD release, make sure to get your hands on this one now. For more info head to www.master-speckmetal.com or www.displeasedrecords.com.