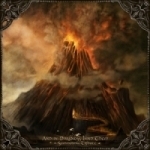 VARIOUS ARTISTS
And In The Darkness Bind Them - A Summoning Tribute
(Echoes Of Koliba Records)
106:02min

There are three undeniable facts if it comes to "The Lord Of The Rings"! J.R.R Tolkien has written a good book; Peter Jackson has made excellent movies and SUMMONING have composed the perfect Metal soundtrack to this vast fantasy universe. First of all my deepest respect for this enormous task because the presented double CD is without a doubt a true underground release and you can nearly feel the heart blood which has been invested by Echoes Of Koliba Records to materialize this tribute. The digipak comes with a fantastic cover artwork – the burning Mountain of Doom created by Kogaion Art – which Protector & Silenius would be proud to use for their next official release. Musical there are light and shadows on this – to 500 items limited – release mainly due the fact that not all bands have successfully captured the unique SUMMONING atmosphere. The song selection is more than suitable with songs from all major periods of the band starting with the (these days) untypical / unfamiliar debut "Lugburz" up to the latest masterpiece "Oath Bound" and even the "Nightshade Forest" EP has been honoured with one track. Some bands returned with their interpretation to the dark roots of SUMMONING – for example SARRATUM from Turkey – which gives the material a blackened touch, other bands preferred to stay near the originals. The 13 bands are coming from all over the world and it’s in some way really impressive how many individuals had been inspired by this Austrian band. Not all of them need to be further introduced to fans of this style but the highlight of this over 100 minutes had been recorded by the American band GRIEFSHIRE – ‘Land Of The Dead’ from the latest release "Oath Bound" – a great song presented in a different light but without completely ignoring the original. A real tribute and the perfect alternative for all of fans this outstanding act. www.myspace.com/echoes_of_koliba, www.kogaion-art.com