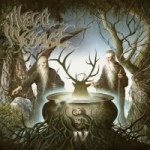 Thinking about this sampler the word bravery is coming into my mind because in times before the light when there was no internet and no idea how it could affect our Metal community a sampler was the only idea to inform the dark hordes about the latest releases of your label. So if I check my Black Metal collection there are so many great bands which I maybe never get my hands on without the connected sampler (Invasion Records compilation CD / MIDVINTER "At the Sight Of The Apocalypse Dragon") but today everybody is depending on the internet and so this format seems like an artefact of former times. But the idea behind the Metal Message sampler is to present young and older bands in a proper way to the audience and it starts with the cover design and layout of the CD (by Jean Pascal Fournie and Kris Verwimp), a proof that not the idea of earning money but the idea of "Support the underground" is the maxim of this release. The 13 bands are, due to the fact that "Metal Message IV" had been released eight months ago, not all completely unknown GALAR, OAKENSHIELD and SLARTIBARTFASS has released their debut via different German labels and SKYFORGER is a band hailing to the Pagan cult since 1995 and definitely nothing more than a cult act. Don’t want to review every band song by song because this sampler is offering 13 different but also very unique Pagan / Black Metal songs which are showing that the cult is alive in more than one country and that not all good bands on this planet have a record deal with our wellknown friends from Donzdorf / Germany.Think that this bravery needs the support from every underground soul so it’s a questions of honour to get your copy. Hail to the artefacts of former times! www.metalmessage.de