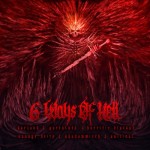 This album is somehow confusing at first, since it is announced as a "split CD”, yet it features no less than six bands who joined forces and contributed two songs each. The result was called “6 Ways Of Hell”, and I personally would call this record a compilation. But that’s just splitting hairs here. So, let’s concentrate on the six bands this album has to offer. The special thing about “6 Ways Of Hell” is the origin of the bands, since all of them are from the (more or less) far East of Asia, any band from a different country. And the music presented here is quite surprising all the way. The disc starts off with BARZAKH, a duo from Indonesia. Their songs ‘Nightmare Of The Cult’ and ‘In The Sanctity Of Abject’ offer solid Black Metal with a distinct touch of DISSECTION. Nothing spectacular, but appealing. Next we have GORESLUTS from Malaysia who don’t play the “funny” kind of Porngrind the name promises (or threatens?). Instead it’s the kind of Grind that makes the CARCASS lunatic hop up and down in joy, which means that there’s a very healthy dose of Death Metal injected (‘Bastards’ especially), as well as some surprising breaks (intro part of ‘0.69 – Chaotic Toxic Turbulence’). The best renown musician of this album plays in HORRIFIC DISEASE from Japan: Makoto Mizoguchi, who already played with HATE ETERNAL and INTERNAL SUFFERING, among others. HORRIFIC DISEASE is his new project with some other musicians from the Japanese Death Metal scene. Musically, they play some more simple, yet effective Metal of Death, that is pretty much to the point without forgetting the energy like in the short ‘Slaughter’. But the melodies have an important role as well, since their other song ‘The Pissed Punisher’ (what a title!) is spiced with even MAIDENesque guitars on high speed. Very well done, guys! Thailand is the home of SAVAGE DEITY. Their simple, old fashioned and raw Death Metal is my personal highlight on “6 Ways Of Hell”. ‘They Reign’ is very charming and breathes some 1980s South American Metal air, while ‘Vanishing Virtue’ has a Thrash vibe of the finest style. SAVAGE DEITY already released a full length and some split releases, so I hope to catch more of this very good band. SHADOWMIRTH from the sultanate of Brunei for sure is the band from the most “exotic” country on this compilation. And they’re the one that needs getting used to the most as well. The vocals are such hysteric that they don’t seem to fit to the melodic Death Metal with a bold Gothic touch in the melody lines. Their first song ‘Thorns’ comes along very chaotic, blackened and still quite unique. ‘Endless’ is a somehow choleric blend of old ANATHEMA and very early IN THE WOODS…, which is either puzzling and fascinating. SUICIDAL from Singapore finish “6 Ways Of Hell” with some extremely Lo-Fi Black Metal. If you think that any kind of production in Black Metal is a sign of whimping out, ‘Armageddon’ and ‘Desecration’ are the best food for you. Yet especially the latter has a very rude charm that should address other old geezers, who were raised in the 1980s, like me as well. To sum it up, “6 Ways Of Hell” is a very cool record that gives anybody the chance to dig some rough diamonds. Check out the label to save yourself a copy at: www.satanath.com. Additional information you may find at the following band locations: BARZAKH, SHADOWMIRTH, SAVAGE DEITY, SUICIDAL, HORRIFIC DISEASE, GORESLUTS