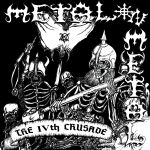 The Finnish underground Metal crusade continues… probably even more destructive and victoriously than ever before. The old underground Finnish Metal fanatic known just by his nickname ‘Immu’ (WITCHTIGER, ex – SLUGATHOR, ex – EVOKED CURSE, etc.), has once again put together another compilation CD on his own Metal Warning label – this time a double disc affair containing of 32 different, mostly Death Metal bands, and 38 songs all in all, from the period 2008 – 2014. Everything on this 2 CD set has been done by sort of ‘cut and glue’ method in the most devoted do it yourself spirit, having rare demo, EP and previously unreleased material from both some known Finnish extreme Metal troops (HOODED MENACE, ARCHGOAT, VORUM, CONVULSE, TORTURE KILLER, etc.) – as well as some less known Finnish underground acts (SKULLFUCK, COPROFAGI NECROLEPSY, SOLOTHUS, etc.) in this tight over 2 and 1/2 hours package. In a pretty nice way the "Metal On Metal – The 4th Crusade" compilation introduces the Finnish underground Death Metal scene the way it stands nowadays. And I have to say it stands actually very beautifully and firmly on its strong feet if the actual content on this compilation is concerned. If Finland ruled in the first half of the 90s Death Metal scene wise, it needs to be admitted that it just does the same in 2014 Anno Bastardi. "Metal On Metal", vol 4. is pretty much a somewhat perfect cross section of the current state of the Finnish extreme underground Metal scene – and oh my Lord, we – the Finns, are such murky, dark and scary sounding creatures if this particular compilation just could be turned into a (horror) movie script. The darker and more desperate sounding can hardly a compilation of bands get than this: this is true and pure Finnish underground extreme Metal – all nearly 156 minutes of it, and nit-picking how certain sound levels may vary between each artist and / or song on this well-crafted compilation, is completely unnecessary at the end of the day really. Just try to get this soon because this 2 CD set is almost sold out already. This is also distributed by Dark Descent Records. Metal Warning email contact: metal_warning@hotmail.com, or Dark Descent Records at: www.darkdescentrecords.com