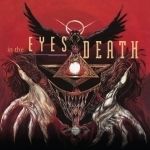 VARIOUS ARTISTS
In The Eyes Of Death
(Vic Records)
58:44min

I always loved compilations. “Projections Of A Stained Mind” for example is still one of my all time favorite records. I loved Rock Hard’s “Monsters Of Death”, Earache’s unforgettable “Gods Of Grind”, Relapse’s “Corporate Death” (when Relapse was cool and INCANTATION, DECEASED and MORTICIAN were featured) and the first two “Death Is Just The Beginning” releases by Nuclear Blast. You get my point here. Now let’s turn to this masterpiece Vic Records so nicely dug out of its shallow grave. Originally released in 1991 by Century Media I immediately bought it on vinyl when I found it for two reasons: first the fantastic artwork by Axel Hermann. I think there was no better visual artist for Death Metal in the early 90s. Yes, there was the great Dan Seagrave, but he always was more cartoonish than Hermann. Just compare “Left Hand Path” and “Into The Grave”: one is a very good Metal cover – the other belongs into a museum next to Caspar David Friedrich. And for this compilation he did a really great job! I was just hypnotized. The second reason was the names of the bands: UNLEASHED, GRAVE, TIAMAT, MORGOTH, ASPHYX and LOUDBLAST. The mystique around these bands in that era was so heavy, it still sends shivers down my spine, through my underwear (with rockets printed on them), down my feet into the ground, where the worms live and feed on rotten memories of good old Death Metal. Where was I? If you own this compilation you can skip the next segment and tune in again a little bit later. If you don’t own or know it read on. “In The Eyes Of Death” features 2-3 songs by the above mentioned bands, almost all of them hard to find today even if they appeared on other releases (Youtube not counting). UNLEASHED start with three tracks (‘Unleashed’, ‘Dead Forever’ and ‘If They Had Eyes’) exclusively recorded for this record, just before “Where No Life Dwells” was recorded in a different studio. What is interesting is when you are aware of the fact that not Johnny Hedlund but guitar player Robert Sennebäck (later DISMEMBER) was the first vocalist of UNLEASHED and he had a deeper voice – you can hear here that Johnny took over and tried to sing in a lower voice on these tracks which later changed when the first record came out (boy, I am in my element). The other two songs they recorded in this session where later released as the “…And The Laughter Has Died” 7″. Next come mighty ASPHYX with two songs already featured on “The Rack” (‘Wasteland Of Terror’ and ‘Pages In Blood’) followed by two tracks by TIAMAT, just before “The Astral Sleep” came out. Their songs also appeared on the 7″ “A Winter Shadow” by CBR Records, but there ‘Ancient Entity’ became ‘Ancient Anxiety’. Both tracks were recorded at Sunlight Studios, in opposite to “The Astral Sleep” which was recorded in Dortmunds Woodhouse Studios. I like the versions on this compilation better. And then there is GRAVE with three tracks from the “Tremendous Pain” session (‘Eroded’, ‘Putrefaction Remains’ and ‘Haunted’) with a unfamiliar cleaner sound, before they entered Sunlight Studios to record their debut. Possible that you could find these recordings on early pressings of that one, but again: some of this stuff is pretty rare. French’s LOUDBLAST come next with three tracks although they were never on Century Media. Of all the featured bands I never got the kick out of LOUDBLAST although their “Disincarnate” cover artwork is one of my favorite Death Metal covers and I bought the LP just because of that. As far as I remember only one of the songs ended on that record (‘Outlet Of Conscience’). The other two tracks ‘Punishment’ and ‘Psalm 9’ (a cover song from TROUBLE) remain exclusive to “In The Eyes Of Death”. But don’t quote me on that. Last but not least: MORGOTH. One track was taken from the then already released “Resurrection Absurd” EP (‘Travel’) and one of the “The Eternal Fall” EP (‘Burnt Identity’), just before they recorded their milestone “Cursed”. I have read that the tape release had a different running order. So what. If you don’t own this record: get it. It is a lot of old school fun and it looks great! If you do own it there is something for you: for every track there is a small interview or statement by members or ex-member from every band about the circumstances of the recordings. For someone like me who inhaled that period of Death Metal there were some interesting information to gain (what, some of them recorded in Bielefeld?), but that does not necessarily is a huge buying point. Still I want to give a big “Thank You” to Vic Records for digging this one up, leaving all the old tipping errors in there and releasing it worthy to its potential! A great compilation to add to your old school collection. www.vicrecords.com