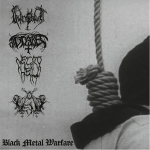 What we have here is a black as fuck 7“ with four bands, compiled and released in the spirit of those old Sombre Records EP series with the unfortunate title… those who know, know. This beast starts off with a band from Germany called INTEMPESTUS – kinda unfortunate if you ask me, because there is another current band, also from Germany, that goes by the same name. It begins ominous and slow, quickly turning into lo-fi Thrash attacks with that rehersal tape charm we all love so much. I like the vocals here, sounding as if a demon would scream in a cave, but the galloping riff towards the end ruins it. Nice, but forgettable. Up next is ANTARES, a band I literally know nothing about. There’s a local animal cremation company called Antares that always advertises in the Sunday papers here, so the triumph of death is omnipresent. Speaking of which, their slow to mid tempo Black Metal reminds me of the HELLHAMMER demos more than once, so that’s a good thing. NECROHELL, the only band from Greece on this 7“, starts off side B with their technically proficient MAYHEM / DARKTHRONE – worship. It’s good for what it is, but somehow paint-by-numbers Black Metal. Greece has more than its share of amazing Black Metal, but this isn’t on my list. Finishing off the whole thing is VENT, more than a pleasant surprise. Somewhere between majestic orchestral darkness and rabid aggression, they know how to capture the listener… the melodic and almost hopeful end part vaguely hints at much greater things – definitely a band I will follow! The design is as true to the original series as possible, the band selection literally could have been on one those compilations – and while neither of the featured bands here is S.V.E.S.T, SECRETS OF THE MOON, BLACK WITCHERY or even KATHARSIS, no band is NARGAROTH either. They all seem to be serious about their respective Black Arts, there is no experimentation whatsoever, and the title fits like a spiked glove. www.into-dungeons.de