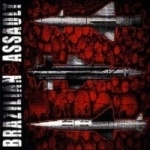 This is really a cool idea and definitely worth being supported! Relapse Records compiled a bunch of extreme bands for their Underground Series and released some very promising demos on a single CD to introduce them to a wider audience. On "Brazilian Assault" (as far as I know there’s also a "Japanese Assault" circulating as well) you’re getting four bands out of South America, that all show a lot of potential. The most professional one of them is without a doubt ABHORRENCE, who in the meantime already released their debut full length (for further details check out our review – and interview-section). The three songs off their "Triumph In Blasphemy" demo from 1999 are not only technically very well executed, but also prove that a good production is definitely possible down there. Their fast and brutal Death Metal in the KRISIUN vein, with several hints of good old SLAYER in the riff department works out just perfectly. The following two bands OPHIOLATRY and NEPHASTH (who are featured with their "Opposite Monarchy" and "The Merciless Face Of Evil" demos respectively) are musically pretty much along the same lines, but unfortunately suffer from a weaker sound. But you can still easily notice that they both have highly talented musicians in their line-up. OPHIOLATRY also have an even deeper grunting frontman than ABHORRENCE and NEPHASTH, a fact of which die hard Death Metal freaks probably might get a kick out of. The last band, MENTAL HORROR (now signed to Necropolis / Deathvomit Records), is the one which appears with the most songs (two were exclusively recorded for this compilation, while the rest appears courtesy of their 1998 "Extreme Evolutive Trauma" demo). But they’re also the ones I find less appealing as they are obviously more rooted in the Grind genre and therefore partly come across quite noisy sounding. But anyway, this compilation is definitely another proof of the healthiness of the Brazilian extreme Metal underground, which sounds a lot more honest to me than all those Scandinavian copycats. Plus this is a good opportunity to check out four quality demos out for the price of a CD.