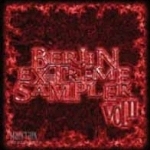 Allright – "Berlin Extreme" is going into the next round. This time they offer a wider variety of genres for they included Hardcore and Metalcore bands as well. Decide for yourself if you like it or not, still it gives a good insight of what’s going on in Berlin’s metallic music-scene. The principle behind the compilation is the same as it was behind the last one from 2006 (of which the review can be found on this pages) so I just concentrate on the bands featured here. First band is REQUITAL which I think are not unknown outside the borders of the city with their straight CANNIBAL CORPSE influenced Death Metal. Nice. The second act is DEVIANT ARTS with a version of Gothic-Death with keys, male grunts and a female vocalist singing in the pathetic IRON MAIDEN vein. Not my type of music and thatfore not very impressing but at least the production is fine and the band knows how to handle their instruments. I have seen them live once and there show was quite nice, so… Next band is quite known in Berlin, the modern Thrashers (not NU-METAL) of HARVEST. What I like about them is their slight VOIVOD touch in the clean vocals. The next bands ONE HOPE LEFT, INFIGHT as well as ANTICOPS play this Metalcore or Hardcore style I absolutely dislike so I will do myself and the bands a favour and spare them my review. If I had to choose between them I would pick INFIGHT for they are quite heavy and not that childish. PROCTON and SUBCONSCIOUS again play a very thrashy version of Death Metal – THE HAUNTED with grunts and DEW SCENTED with Hardcore screams. Not bad but nothing special either. The last bands come from the Death Metal genre again, GOREGAST with their cool primitive Deathgrind, technical SPAWN, strange, weird and impressing UNSOUL (better look out for this guys in the future!) and last but not least ultra fast SINNERS BLEED with GOLEM’s Eric on drums (together with SPAWN and UNSOUL definetly the best band on this sampler). Unfortunately there is no real outstanding band on this CD which shows a problem Berlin has in my opinion: all bands are way too much focused on their own genre, nobody pushes the limits further in any direction or an indicidual sound. It has to be Death Metal only, Thrash Metal only, Hardcore only and so on. For a creative city like Berlin I would expect more creative bands, and not the 2115342634th technical Death- or Thrash Metal band without an own identity (!). Don’t get me wrong: the bands here are more or less all cool, but where are the absolute crazy ones? Maybe UNSOUL is the clue, I don’t know. so far so good… All information about the bands (bios, pictures, logos…) are on the CD’s multimedia track. If you are interested in getting a copy of Berlin Extreme check out the website: www.berlinextreme.de