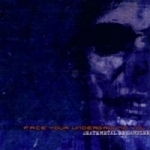 Usually I don’t really like compilation albums and therefore very rarely feel the urge to listen to one of them in its entirety. But with this one here it was quite different. "Face Your Underground" got compiled and released by the editors of DeathMetal.be and just like their website, this CD is also dedicated to the Belgian underground scene exclusively. Never knew that they had so many cool, internationally still unnoticed bands overthere, so the release of this compilation obviously makes a lot of sense – especially considering the very high quality of the majority of the featured recordings. Even though they label themselves with the Death Metal tag, "Face Your Underground" didn’t turn out as narrowminded as you might expect it to be for that manner. Well, ok – most of the bands on offer here indeed deliver brutal Death Metal, from the frog noise department (SERIAL BUTCHER) to late DEATH inspired stuff (SOLIPSIST). But then again there’s also bands that obviously try to conquer new grounds, like AXAMENTA, who play a very melodic form of Death Metal… But instead of coming up with the usual and wellknown Gothenburg-ish writing formular, they’ve added some very epic keyboards and a rather black sounding vocal delivery to their contribution, which actually sounds kinda cool. My personal favorite on here comes from MORTIFIER though. This band sounds extremely unique on their mission in combining some eerie keyboard parts à la late EMPEROR, with a CANDLEMASS type clean singing, partly switching over to very grim and aggressive black vocals, while the music itself is basically raw Heavy Metal. Very impressive! ABORTED and ILL FARES THE LAND should already be known to most of you reading our magazine, while IN QUEST probably delivered the most professional / matured sounding track. Not all of the bands are entirely great (DEMONIZER, DISOWN and ENDOR didn’t really impress me too much), but like I mentioned in the beginning already – in its entirety this is one of the rare compilations really worth checking out! Looking forward to volume 2 already. Contact: www.deathmetal.be, info@deathmetal.be