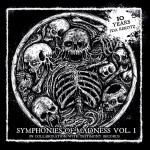 2016 marks a decade of existence of extreme Metal label F.D.A. Records from Germany. To celebrate the fact and to thank everyone for their support, the label has released a convenient package featuring a 10-year anniversary t-shirt (designed by Marc Niederhagemann of Art Wars Mediadesign – also the frontman of the Death Metal band LIFELESS) and a compilation CD with 17 tracks! The CD contains unreleased tracks from upcoming releases on F.D.A. Records and 3 special songs from upcoming releases on Testimony Records. Opening the festivities, we can find one of the still unreleased tracks included on this compilation by LIFELESS. The track will be available on their upcoming album, still to be named and with the release date set to sometime 2017. It’s classic LIFELESS stuff and if you’re familiar with their previous album “Godconstruct” (2013), you will probably say something similar to what I’ve said when I heard it: “Fuck! Great song! Worth the wait!”. Second track is another unreleased one, from DECEMBRE NOIR. The Doom / Death band has a new album out and this track is included in it. It’s a great example of how good these guys are and how they developed their music since their debut “A Discouraged Believer” (2014). If you want to know more about them (and you should), there’s already a review available for their new album here. Track #3 brings back the classic Swedish Death Metal style by the hands of REVOLTING. ‘The Lighthouse’ is a chainsaw based track that starts fast and slows down to the end. It is taken from the upcoming REVOLTING album, to be released sometime during 2017. DEMON INCARNATE are the guests to fill the position #4 on the tracklist with the track that gives its name to their most current release. It was already properly reviewed here. RUDE slaps you in the face on the next track with a song from their yet-to-be-released sophomore album. And damn it! These guys are good and will be back with a great album, judging by this sample! Great old school Death Metal that will please every fan of the genre. Italy’s BLOOD OF SEKLUSION is next on position #6. Another unreleased track, showcasing what we can expect from their second full length, to be released in 2017. We just need to hear the very first riff on this track to know what’s coming for us! Love DISMEMBER? You’ll love these guys! Track #7 is CREMATORY STENCH’s turn to rip our ears with their cavernous guitar sound. They have a new EP on F.D.A. Records and it was already reviewed here. Another already released track is next. FATALIST’s new album is out (“The Bitter End”) and shows us how far the Swedish Death Metal sound has reached! From Ventura, CA, FATALIST makes sure the chainsaw sound is alive and well. The next three tracks mark the contribution of Testimony Records. Amazing stuff from DEMONBREED (‘Barren Wasteland’ taken from “Where Gods Come To Die”), ESCARNIUM (‘Radioactive Doom’, taken from “Interitus”) and THE DEAD GOATS (‘All Of Them Witches’, the title track from their new album). The three bands showcase the quality and diversity the label has to offer. Every track was taken from their respective 2016 releases. KEITZER occupies position #12 on the list with the title track from their upcoming album (“Ascension”, October 2016). German Grindcore at its best for everyone’s pleasure! Lucky number 13 belongs to WOUND. How I missed these guys! Since their brilliant debut on 2013 I was waiting for some new stuff from this German Death Metal band and they didn’t disappoint one bit. The track is taken from their second album, to be released in January 2017. Can’t wait for it! Next in line is THE END. Not the end of the compilation but a track from the upcoming EP (to be released in September 2016). If they need any introduction, let’s just say they have people that played in such bands as DEATH, MASSACRE and DEATH BEFORE DYING. I really don’t think they need any more introductions than this. At this time, if you need to rest your neck of all the headbanging, forget it! INCARCERATION is here to make sure your head will violently go back and forth. The track ‘Chaos And Blasphemy’ is taken from their upcoming October 2016 release “Catharsis”. Pure Thrash / Death with the speed set to maximum level. #16 belongs to DISCREATION. The track is ‘The Blood Mill’ from their new album (yet to be named, to be released in 2017). Don’t be fooled by the slow intro, though. It’s just enough to get a glass of wine or beer, swallow it and go back to the headbanging! The honor of closing the compilation goes to OBSCURE INFINITY, a veteran band from Germany. This track is from the recording sessions of their 2015 album “Perpetual Descending Into Nothingness” (reviewed here). So, this album is really worth the money, especially because the price is just under 10€ and it includes the album and the t-shirt. Also, you would be supporting one of the greatest labels around and they sure deserve our support! www.fda-records.com, www.testimonyrecords.bigcartel.com