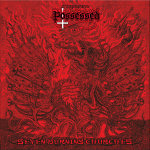 This year marks the 31st anniversary of the release of the iconic POSSESSED debut full length "Seven Churches" – an album More Hate Productions pays hommage to with this release "Seven Burning Churches" that gives us "Seven Churches" covered by an array of great bands, and ‘Swing Of The Axe’ as a little bonus. More Hate Productions is based in Russia, and the bands are also centered around the former East Block, with a little trip to Italy. All bands are from the Thrash and Death Metal scene, so all quite capable, style-wise to handle a POSSESSED tune quite well. And I think all 11 bands on this tribute do a quite good job by catching that special and haunting aura noir that makes "Seven Churches" such an enormous and mindblowing album. We are getting energy and intensity, the bands have seemed to put some passion and energy into the recordings, so all tracks have gotten a proper salute. Especially the three Death Metal bands GROND, PYRE and CASTRUM, and well, the three only bands I knew thoroughly on beforehand, do some really good jobs. GROND pulls ‘Fallen Angel’ into their dark and twisted Lovecraftian universe and make the track even more dark and twisted than the original. CASTRUM twists ‘Death Metal’ into their manic universe and deliver it quite machine-like and sterile, which actually works, as they are putting a good deal of intensity into it. PYRE, that start out the album with ‘The Exorcist’, is putting CANNIBAL CORPSE to shame with their version, a good deal of pure old school Death Metal brutality and intensity. My favorite track on the album, ‘Twisted Minds’, is also done really good by SICHGART from the Ukraine, a dark twist on the original with some really good vocals, old school Death / Thrashing madness done just right. A good pick up for all fans of POSSESSED, as the 11 bands on here are doing a really good effort to hail the good old gods of Thrashing madness, and if the album had been on schedule for a release last year, everything would have been even more sweet. More info at www.morehate.com.