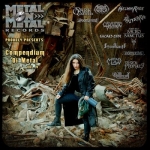 Hell yeah, bring on these compilations! This one is from the old school oriented Metal On Metal Records showcasing a great slap of Metal. We are getting 14 tracks from 13 bands, only British ARKHAM WITCH is featured with two, two tracks that don’t really hit me. Though there are lot of other bands on this compilation doing some good music. The party kicks off with SACRO SANCTUS from Malta, delivering some great Heavy Metal with some darker influences, they are delivering some good deeds and hit the right atmosphere, a great headbanger. One of my favorite tracks on this album is ‘Shipwrecked At Doom Bar’ from the German Doomsters in DOOMSHINE, a great dark catchy track with some good darkness and riffing, they are still doing quite good. A little lighter, though still in the traditional Doom vein we have MORTALICUM, a new Swedish aquintance for me. They are doing a great catchy track with some good melodies, a gripping atmosphere and some welldone vocals. In the more brutal vein we have German OUTRAGE with their early VENOM and BATHORY influenced Metal, a great blackened ‘banger they are delivering here, ‘Pact Of The Wicked’ recorded live on last years Metal Magic Festial VIII in Denmark, it sounds like the party was good. We also have CADAVERIC POISON that deliver some grim Death Metal with a good furious drive. In the more traditional Heavy Metal world we have the German bands SACRED GATE and METAL LAW that deliver some great catchy tunes, it is hard not to be caught singing along, good energy and drive in both band’s tracks, straight to the bone, as we like this kind of Metal. We do, of course also have the good old American Heavy Metallers MELIAH RAGE, doing a nice tune of their Speed / Thrash Metal from a time long forgotten. A good album, if you want to get to know the current roster of Metal On Metal Records, and some quite tunes, in very traditional styles of each genre, something I often like. If you do too, give this compilation a spin. More info at: www.metal-on-metal.com