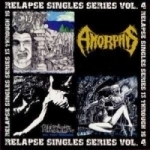 There’s not that many compilations around that I would personally consider as essential from an underground-fan’s point of view. Well, "True Kings Of Norway", "Projections Of A Stained Mind" and the (infamous) "Seraphic Decay Compilation" come to my mind right away and then it’s getting quite difficult already… But now I can definitely add this new series on Relapse Records to the list as well. The idea in itself may not be very original, but who cares as long as there’s so much quality involved?! You may (or may not) remember that Relapse Records released a whole bunch of excellent vinyl 7" EPs in the past and they all get re-issued in chronological order on CD now – four of them on one disc! The already fourth edition features the label’s back catalogue numbers RR013 to RR016, which are connected to EXIT 13, PHOBIA, GOREAPHOBIA and AMORPHIS. Listening to the band’s material nowadays partly brings back some cool memories (the early AMORPHIS and GOREAPHOBIA songs definitely stood the test of time!), while my opinion on EXIT 13 has changed quite drastically ever since I heard "Spare The Wrench, Surrender The Earth" for the first time. Back then I didn’t like these sickos at all… Thirteen years later I really enjoy their crazy mixture of early CARCASS, late AUTOPSY and weird PRIMUS type stuff combined with a couple of freaky ATHEIST elements… and not even that describes them correctly. Totally unique shit (even after so many years!), which obviously got composed after the (ab)use of various "mindblowing substances"! Never heard any stuff by Huntington Beach’s PHOBIA in the past, but I really enjoy their four songs on offer here. The band played a very crushing form of straight forward Death Metal, with some references to classic SLAYER in the riff-department (just a lot more brutal). They constantly sound totally intense and the only little letdown here is the vocalist’s quite one-dimensional way of deep growling. So, all in all this is a great trip back in time for all Death Metal lunatics who missed out on the original vinyls or for those who played them to death throughout the years. In case you’re interested, here’s a list of what you’re about to find on the other three discs: "Volume 1" features EPs by VELCRO OVERDOSE, FACE OF DECLINE (both of them totally unknown to me), APPARITION’s "Eternally Forgotten" (later to become SORROW, one album on Roadrunner Records) and INCANTATION’s classic "Entrantment Of Evil" 7". "Volume 2" has DECEASED’s "Gut Wrench", GENERAL SURGERY’s "Necrology", DESTROY’s "Total Fucking Chaos" and DISRUPT’s "Refuse Planet", while "Volume 3" (my personal fave, bandwise) offers classic stuff by ROTTREVORE ("Copulation Of The Virtuous And Vicious"), REPULSION ("Excruciation"), MONSTROSITY ("Burden Of Evil") and INCANTATION again ("Deliverance Of Horrific Prophecies"). As far as I know this whole series is limited, so make sure to go for ’em before it’s too late! Label contact: www.relapse.com