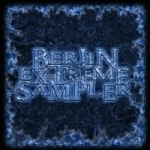 Ah, I always liked cool undergound compilations and this one is definetly cool! Berlin is not Stockholm, Tampa, New York or whatever so I guess the featured bands are unknown to most of you. Thanks to some great local Metal-clubs, bars, concert-rooms, the "Stahlwerk" radio-show and the featured bands you get the chance for a good inside view into Berlin’s fresh Metal-underground for a the fair price of 5,- Euro (plus postage outside the city). But now let’s get to the bands… One of the oldest and most popular bands on this compilation are the old-school Deathers of HARMONY DIES with two tracks from their CDs "Don’t Trust" and "Impact" (for the last one you’ll find some notes in our review section). Also one of the elder ones are NECROMORPH with four Grind / Crust tracks from their "Inputcollapse" CD (again check out the review). DAZE is next with two great highly-technical twisted Death Metal: gosh, I wonder why this band hasn’t been signed yet?! Incredible how technical this demo (!) band is. Check them out! SECRETUM comes up with two Tampa influenced Death / Thrash tracks from their CD "Happy Killing Time". Quiet nice. Technical and aggressive Thrash with a slight Death note comes from DAMNED DIVISION, also with two tracks taken from their split with CHAOSPHERE who are featured as well with two tracks from the mentioned split. And what a bastard the last band is!! CHAOSPHERE could be Europes answer to CEPHALIC CARNAGE! Totally crazy, freaky and highly technical Relapse Death Metal. Veeeery promising! Who’s next? Ah yes, the modern Deathers of UNSOUL: MORTA SKULD meets SIX FEET UNDER meets NOCTURNUS keys. Not bad. "Welcome To Annexia" is the name of their CD where the two tracks are taken from. Last two bands on this compilation are NONCHRISTIAN with one track from their EP "Schattentanz" and ARS MORTIS with two tracks from "Tempus Mortis". NONCHRISTIAN offer straight mid-tempo Death Metal with a slight Black Metal feel to it and German lyrics. ARS MORTIS play straight yet weird Thrash Metal with a touch of old Death Metal. Alltogether a good mixture, although I missed some great bands like ORTH or SPAWN… but fortunately a second part is planned for next year. So first keep your ears open for CHAOSPHERE and DAZED but also get your copy of "Berlin Extreme 2006" from this adress: www.berlinextreme.de and support the underground.