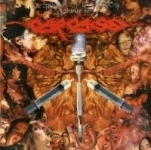 Even though this tribute compilation was certainly a lot more justified than many of the other ones that are circulating these days, I still don’t completely get into it. And my biggest problem is: I don’t even exactly know why, cause everything seems to fit. From the totally CARCASS typical cover design, to the selection of bands and their interpretations of classic CARCASS songs. Seventeen bands in total, and among them such established underground heroes such as NASUM, GENERAL SURGERY, NECRONY, AVULSED, IMPALED, EXHUMED, ROTTEN SOUND, REGURGITATE (who are featured twice on here), HAEMORRHAGE, DISGORGE, DEAD INFECTION and a handful of less known names. And as you can probably imagine, with a few exceptions (‘Corporeal Jigsore Quandary’, ‘Tools Of The Trade’, ‘Carneous Cacoffiny’…) all of them chose to cover stuff off the first two CARCASS records "Reek Of Putrefaction" and "Symphonies Of Sickness". Nothing wrong with that either, if they would at least have tried to come up with a better production instead of going for similar poorly recorded versions. I mean, who’s really interested to hear classic CARCASS songs, that sound almost as noisy as the original (but without their charm), if you own the CARCASS albums and can listen to the real thing instead? Ok, to remain fair. Not all of them have weak production, there’s a couple pretty good ones on here as well. It’s just that I had probably hoped for something more crushing in the vein of ILLDISPOSED’s great version of ‘Reek Of Putrefaction’ (not featured on here, but on their "Retro" album), which unfortunately isn’t the case. So, in the end this remains nothing but a one hour long roller coaster ride through the legacy of CARCASS, without any outstanding moments.