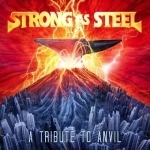 While it’s a distant memory, I vaguely recall someone saying or perhaps yelling something about a concept called "spirit"; it was probably at a high school pep rally or something. Then, spirit was an intangible term they threw around with those of us who aren’t getting MVP trophies or winning championships to somehow get us involved in the victories of others, a sort of pity role we get by wearing the school colors in order to share their proverbial place in the sun. Personally, I’m not big on cheering and I am now wise enough to know that any sports movie worth watching doesn’t merely follow the trajectory of born winners, but rather a Job-esque battle of spirit (the real kind), a testament to the heart of the game in the face of adversity and the doubt of others. Canada’s ANVIL have come to embody this spirit and they have seemingly transcended band status after the success of the documentary "The Story Of Anvil". Their mythos is one of overt talent and appeal countered by commercial misfortune; they were poised for success early on, touring with future household names such as SCORPIONS and WHITESNAKE. Somewhere in the mix, was ANVIL, a heavy favorite at the time, yet somehow they never arrived at the same finish line as the aforementioned acts. Listen to any of ANVIL’s records from this period and you will be baffled. They had perfected all of the elements of a great 1980s Heavy Metal band. The riffs had just enough sleaze and they were able to make anthems out of songs of various speeds from the thunderous and dizzying to the slow fist-pump pace. They embraced the basic pillars of denim-clad headbangers everywhere: a little satan, a lot of partying and a dedication to keep on rocking. Needless to say, their destiny of filled arenas and headlining tours was thwarted by uncertain outside forces, yet ANVIL never quite took pause over the years and continued a stream of steady releases time after time. Honoring their hard work with a film and now a tribute album only makes sense. "Strong As Steel" features an international arsenal of bands, predominantly underground ones who identify with the spirit of ANVIL; sure the sold-out shows rule, but that isn’t what has kept ANVIL going all of these years and it shouldn’t be the reason behind motivating musicians to make fierce, heavy and fun music. Of note is Canada’s CAYM featuring Tyler Reiner, the drummer spawn of ANVIL’s own Robb Reiner keeping the tradition in the family. I also must give due respect to Seattle’s mighty SKELATOR performing ‘Cut Loose’ in a spot on rendition from a torch carrying 80s style Metal band. ‘666’ has always been one of my favorite ANVIL songs and I really enjoy SATANICA’s (Japan) interpretation featuring grittier, growling vocals on top of an already dense and unrelenting track. Overall, it’s a solid tribute and an equally heartfelt and professional effort by producer Bart Gabriel and the contributing bands. It reminds us that while the ways of the music world are mysterious, the spirit of Metal endures as a constant. In keeping with this spirit, it is rumored that only 666 copies are to be released so be sure to reserve yours soon. And as always, "keep on rockin…" www.skolrecords.com