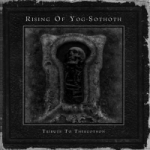 The terminus cult act is used for nearly every band these days even if it should be limited to bands that in some way changed and influenced their musical environment. One of these bands is the Finnish combo THERGOTHON, founded in 1990, which released only one single full album – "Stream From The Heavens" released in 1994 via Avantgarde Music – but with an immense impact on the underground scene. During their short carrier (1990-1995) the band recorded only 1 hour of musical material including official / unofficial demo releases but without exaggeration THERGOTHON are one of the first bands which played (maybe in some way invented) Funeral Doom and that nearly a decade before the style became so popular. The Russian Doom specialist Solitude Productions summoned 17 bands from around the world to pay tribute to this remarkable band and it’s not only the music but also the format which makes this release so interesting. Due to a "lack" of material the tribute is offering two sides of the same black mirror means every song – except the rehearsal track ‘Dancing In The Realm Of Shades’ performed by the US Doom act PERSISTENCE IN MOURNING – is presented by 2 bands and it’s quite interesting to listen to different versions of one and the same material. I was really looking forward to this tribute because the bands are mainly underground bands – maybe EVOKEN must be excluded due to the own cult status within the small Doom scene – with the aim of worship some of their own musical masters instead of earning money by recording a song for a further heartless major label tribute. In total "Rising Of Yog-Sothon" is a real tribute to one of the true cult acts of Finnish Death / Doom Metal with fantastic artwork, music and a lot of true underground dedication. www.solitude-prod.com