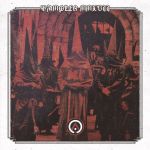 This sampler of Les Acteurs De L’Ombre Productions shows a selection of upcoming releases by signed bands in late 2017. It’s mostly Black Metal, but since this label has specialised in experimental Black Metal, it comes in various forms. Les Acteurs De L’Ombre Productions was formed in 2009 and is run by Gérald Milani, who you might know from handling vocals on FUNERAIUM’s "Noces Chimiques". Bands on this sampler are ARKHON INFAUSTUS, MONOLITHE, AU-DESSUS, SPECTRALE, TIME LURKER, HEIR, PENITENCE ONIRIQUE, MAIEUTISTE and PENSÉES NOCTURNUS. Mainly French bands, with AU-DESSUS (from Lithuania) as the only exception. ARKHON INFAUSTUS kicks off and their Death / Black Metal still has much in common with BEHEMOTH. Their track ‘Amphessatamine Nexion’ will appear on "Passing The Nekromanteion" that will be released somewhere in October. It is still brutal, tight and fast but unfortuately a bit monotone. It’s far from bad, but I expected more from these guys. It’s much like "Orthodoxyn" but I wonder if this will beat TEMPLE OF BAAL, for example. Listen and judge for yourself. Next is MONOLITHE, who bring ‘Burst In The Event Horizon’. This will appear on next year’s "Nebula Septem". The main riff and atmosphere were powerful enough to last the entire track. Cool stuff. The great AU-DESSUS takes over and increases the intensity with ‘X’ from the recently released debut "End Of Chapter". This was a remarkable album and lists them in the row of inventive quality bands like MGLA, NIGHTBRINGER, ACRIMONIOUS (and others) that sprayed some fresh blood in this genre. SPECTRALE brings a respite with ‘Andromede’. I don’t know how much this track represents their style, but this restrained acoustic tune is as classy as it is comfortable. It probably fits the experimental side of this label more than anything else. TIME LURKER is what you expect from a band on Les Acteurs De L’Ombre Productions. Very atmospheric and excruciating. It reminded of PARAMNESIA and is pretty impressive for a solo artist. HEIR shows a promising prelude with ‘L’Ame Des Foules’ of their upcoming "Au Peuple De L’Abîme" which will appear in October. The production is unusual with a lot of reverb in the drumming department. The effect goes hand in hand with the atmosphere. The sound reminded of the very old ENSLAVED and this promising track makes me curious for the rest. PENITENCE ONIRIQUE is next and ‘Le Sel’ appeared on "V.I.T.R.I.O.L." from May 2016. The first part of this track leaves a similar impression as HEIR. Moody and epic. Maybe a bit too epic for my taste, pushing things too far. I better check that album, because it’s of high standard for sure. MAIEUTISTE is featured with ‘Death To Socrates’ from their 2015 release. It starts with an unmistakable DISSECTION riff, but don’t let them fool you. They offer way more which is showed halfway this track. Besides the melodic side there’s a lethal and twisted one, reminding of MANTICORE for example. Very cool stuff and "Maieutiste" will be re-released in December. Things can get more disturbing, which PENSÉES NOCTURNUS shows here as the closing act. Their debut "Vacuum" was a eery acquaintance and PENSÉES NOCTURNES has developed to something like DODHEIMSGARD, but far more frightening. Equally messed up as it is genious and ‘Paria’ appeared on their second album "Grotesque" from 2010, being re-released in September 2017. This is a very nice sampler and it shows the high quality of some French bands. I won’t say they’re underrated, but for sure they’ve contributed to the development of Black Metal today (the ARKHON INFAUSTUS, MONOLITHE and HEIR songs on here are all exclusive raw versions – Frank). For more info, check www.facebook.com/ladloproductions