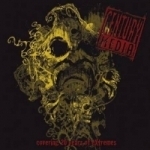 Century Media, to celebrate their 20 years in the Metal world, have recorded the best of their roster recording some of their most popular songs. Some of the bands playing covers are covered themselves like GRAVE. Their classic ‘You’ll Never See’ is covered by THE FORSAKEN. Other noteworthy songs are ASHPHYX’s rendition of CELTIC FROST’s ‘Os Abysmi Vel Daath’, and DEVIAN’s version of MORGOTH’s ‘Isolated’. There are many more tracks totalling in a whopping one hour and thirty four minutes of Metal. Covers are fun, but they’re often recorded hastily or suffer from the band troping the song to fit their preference. THE FORSAKEN added a misplaced blast beat on the GRAVE track, much like Zakk Wylde rapes Randy Rhoad’s ‘Crazy Train’, and a few BLACK SABBATH’s ‘Iron Man’ with harmonic squeals. Never fear, for this is not characteristic of the compilation as a whole. Besides, it’s never wrong for a band to salute its mentors with a cover tune once in a while. www.centurymedia.com