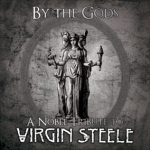 I approach most tribute albums with caution. What are they really for? Pay homage to a band or show a version from another one? That will always be the mystery… truth is that tribute albums tend to be a mixed bag. Some good versions, some so-so and some awful. Well, at least talking about the Heavy / Epic / Power Metal legends of VIRGIN STEELE I am sure I have heard many covers done here and there, so this album seems like a good way to put them here. Although I have always liked the work of David DeFeis (who is not a founding member of the band, but for some reason everybody thinks so) I always liked the work of his other bands more (ORIGINAL SIN, PILEDRIVER, EXORCIST). VIRGIN STEELE I felt it was something of an acquired taste. Yes, they do have some epic songs and some great riffs, but were also cursed with weak productions most of the time, thus always being in an inferior league compared to similar bands. Still, they are a legend on their own and thus this tribute must prove something of that. We have 11 bands, all of them in the Power / Heavy / Epic / Progressive Metal realm doing songs that cover the discography of the band. In fact, this tribute is quite solid as the quality of performance and recording of the bands is very good. Maybe only that DEADSTAR song they choose, ‘Image Of A Faun At Twilight’ (a purely instrumental with no relation to Metal whatsoever), might sound weird for a tribute album to choose. Best version will be the ones by CRYSTAL VIPER from Poland and CYCLOPHONIA from Norway (I personally was very impressed by ETERNAL WINTER’s ‘Crown Of Glory (Unscarred)’, because it surprisingly comes really close in the vocal department and feeling to the original and ‘Love Is Pain’, the very commercial thus totally unusual choice of ARMORY – Frank). All in all quite a nice album, very coherent and I am sure die hard fans of the band will surely enjoy this one a lot. It makes you think why these guys were not at least in league with MANOWAR… so it is destiny I guess (The booklet consists of comments from David DeFeis about every featured band and their version. To me a quite superfluous idea since I wasn’t expecting any critical words here anyway, so contact information for each band would probably have been a more common, but probably also better solution. Great cover artwork though – Frank). For ordering information check out www.majesticmetalrecords.com

Julián “We Rule The Night” Núñez

Julián "We Rule The Night" Núñez