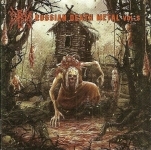 There’s no way to find common points between the evolution of the Russian Heavy Metal scene and those from America or Europe. Yes, the Perestroika opened new frontiers to Russian people and gave the chance to many new bands to emerge, but, compared to the rest of the world, all happened with more or less a decade of delay. The years in which names like ARIA or KOROZIA METALLA had the monopoly of the Soviet music scene and achieved attention as a protest movement, seem light years away from what Russia can offer nowadays in terms of extreme music. Indeed, since the early 2000s Russia has started developing its own extreme Metal underground scenes and subgenres, especially Death Metal, brutal Death Metal, Black Metal and Grind. A well deserved round of applause goes for all the Russian underground labels that, like Coyote Records, No More Hate Productions and Darknagar Records, continue to discover new talents in this florid scene. With this spirit the fifth edition of this compilation was released by Darknagar Records. The album cointains 18 unknown Russian bands, has a length of more than 77 minutes and – gran finale – the cover artwork is a festival of hanged fetuses in the vein of "Butchered At Birth". The common thread here is Death Metal and its many facets. Like in all compilations there are some strong points and some weak ones. To me the best bands here are those playing traditional and brutal Death Metal: THE MUTILATOR, HOUSE OF THE BUTCHER, ROTTING BUTCHER, MARBLE CARRION, POGHOST, TEODOLIT and 602. They know how to play Death Metal in a fast, brutal and sick way. We have tons of blast beats and double bass parts, technical guitar riffs and guttural vocals. There are some trendy slam parts here and there, but in the right amount. These bands don’t invent anything, but are very enjoyable, aided by a a professional sound and a killer production. The rest of the bands are more into progressive Death Metal or modern, melodic and symphonic experimentations: not really my cup of tea. But if you’re interested in BELPHEGOR and BEHEMOTH worshippers, a band like CORVUS LIVES AGAIN deserves a special mention, I guess. Can’t you live without discovering new underground artists? Well, get this compilation here: https://darknagar.bandcamp.com. More info at www.facebook.com/russiandeathmetal