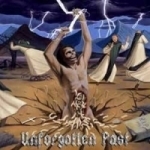 A tribute to Chuck? Honestly: who thinks this might be equally moving as the original? I can think of just a handful of bands able to deliver a good performance of DEATH material. I remember NECROPHAGIST’s cover version of ‘Crystal Mountain’ at the Fuck The Commerce Festival a couple of years ago. That was good. IRREDEMPTION’s (Spain) version really isn’t. PERDITISM rape the MANTAS demo classic ‘Legion Of Doom’ with ridiculous effects on the vocals while HYONBLUD come up with something semi-original, namely with an almost froggy version of ‘Scream Bloody Gore’. But which old school DEATH fan wants something like that? TWO PAIN ORGANIZED deliver a totally MAIDEN-like version of ‘Overactive Imagination’. Finally, I’ll have to highlight my fave track by HYPONIC from Hong Kong (I guess HK stands for that city?): their extreme Doom version of ‘The Philosopher’ reminds me quite a bit of ESOTERIC and the likes. Cool! The only original song (= not a cover song) at the end of the sampler doesn’t have anything to do with Death Metal but rather with Gothic or something like that. Not too bad but I don’t see why it’s on this record. What I find particularly striking about "Unforgotten Past" is that so many bands come up with weak vocal performances or even use terrible vocal effects. Hey – Chuck was one of my fave Death Metal vocalists as well!!! Oh, yes, before I forget: the cover fuckin’ sucks! So try to keep HYPONIC in mind (if you’re into Doom) and – if interested – get the sampler via mailorder or directly from China: http://xmusick.areadeath.net