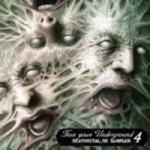 I’m still heavily impressed by the healthiness of Belgium’s extreme underground in general and the dedication of the DeathMetal.be guys in particular, who got this whole project off the ground. This is already the fourth edition of their very cool "Face Your Underground" compilation series within a rather short period of time, this time featuring another 25 brutal bands. But with all respect to the project I gotta confess that I would prefer more quality over quantity after all. To me the whole layout of "Volume 4" looks kinda rushed (even though the frontcover art of Djahal is still kinda cool) and once again 7 out of the 25 acts (HERFST, SUHRIM, EMETH, ORDEAL, CRIMSON FALLS, NEVERLIGHT HORIZON and LEPTOTRICHIA) have already been part of "Face Your Underground" volume 1 – 3 (SUHRIM even got featured for the third time now). I don’t really see the point in including the same acts over and over again when there’s still enough undiscovered talent left?! But then again, there’s still 18 new ones left, so who am I to complain actually? The majority of bands is once again musically located in brutal US style Death Metal (from typical MORBID ANGEL influences to the frognoise department), but this time you’re also getting a handful of acts that are far more sick, with obvious Grindcore tendencies. Personally they do not exactly reflect my taste in heavy music, but it’s interesting to check them out nevertheless. I don’t think there’s any need to name some standouts (MORDRED and MINOTAUR obviously haven’t done their homework good enough when it came to the coice of their monicker though) as most of the bands come up with similar quality anyway (songwriting and production wise). So, once again a damn cool compilation worth being checked out, especially since it still gets sold for the ridiculous cheap price of 5,-Euro (ppd. worldwide!!). All further info at www.deathmetal.be/face4