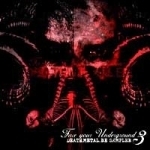 This compilation series quickly turned into one of my favorites, due to the impressive quality of the bands included. If you aren’t familiar with it yet (you’re definitely missing out on something special then!), let me tell you that "Face Your Underground" is a compilation series from DeathMetal.be, that is focused on the Belgium underground exclusively. And this time it even tops the previous two editions as vol.3 has turned into an impressive double-CD set for the first time, featuring no less than 32 bands with a total playing time of approximately 135 minutes!!! And the best it yet to come: the whole thing still sells for the price of 5,-Euro (ppd. worldwide!!!). Musically "Face Your Underground Vol.3" offers a lot more musical variety as opposed to the brutal Death Metal that mostly dominated the first two editions. That means you’re about to experience intense and very brutal Death Metal (still their main concern on disc 1), melodic Death, Black Metal and Grind, as well as a handful of contributors from the Doom, Epic and Progressive genres. Even though I personally don’t like all of the stuff on offer this time (which is quite natural I guess) and would have preferred to keep the series more narrowminded, it’s pretty obvious that each single contribution was selected for quality reasons once again. A little bit of criticism / suggestions from my side should be allowed nevertheless… Bands that were already featured on volume one and / or volume two (like ABORTED, AEONS OF OLD, FLESHMOULD, GORATH, HEADMEAT, IN-QUEST, LENG TCH’E, MANIC MOVEMENT, SERIAL BUTCHER and SHADOW’S VEIL) should be excluded in the same way as the more established Belgium bands such as ENTHRONED and ABORTED. The tracklist needs to be featured on the backside of the CD (instead of inside the booklet) and using several tracks by the two extreme Grind acts HYBRID VISCERY and MUCUS (who weren’t even able to deliver their tracklists in time) was a little bit annoying to me as well… Apart from that: thumbs up for another killer compilation that easily lives up to its predecessors. All further info at www.deathmetal.be/face3