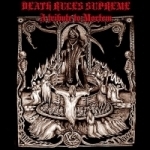 It’s nearly twenty years ago, that a quite new genre in music compilations started to become more and more successful: tributes to influential or cult bands. It started with bands like VENOM. Many years and billions of (mainly redundant) tributes later, we have reached a quite obscure level of paying deference to an artist: a tribute to MORTEM. The Peruvian number-one Metal band definitely is an outstanding act and released four great, brutal and mainly very fine albums. Now eleven bands from all over the planet (USA, Poland, Peru, Malaysia, Brazil, Sweden, Philippines, Canada and France) play their favorite MORTEM song and most of them are doing well (the best known acts probably are Brazil’s HEADHUNTER D.C., who deliver a crushing version of the classic ‘Summoned To Hell’, Poland’s STILLBORN and the sadly defunct French BLOODY SIGN – Frank), even though none of them stepped too far from the original. My faves are the two Peruvian contributions, EVILDAMN with their very good version of ‘Demonolatry’ and PSICORRAGIA, who did an (old) MY DYING BRIDE inspired version of ‘Unguy Maman (Mother Of Disease)’, complete with violins and doomy atmosphere. But top of the bill are Swedish (obvious) sickheads KARNARIUM, who put ‘Fiat Obscuritas’ into a meatgrinder and minced it. Brutal. Nevertheless it is quite more worthwhile to check out the originals, since MORTEM are one of the best, if not really the best extreme Metal band from South America. Those who know should give this album a chance. The artwork was done by Milovan (Zapisnik zine), every band has its own page in the booklet and the CD is limited to only 500 copies worldwide. Check, as always, the label sites: www.myspace.com/heavierrecords or www.acidoproducciones.com.pe