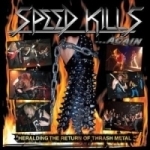 From the mouth of Bernard Doe / METAL FORCES "Who could have imagined back in the early 1980s when the foundations of Thrash were being laid just what an impact this new adrenaline charged phenomenon would have on the Metal scene? Initially shunned by the mainstream music media as a passing fad, Thrash was the sound for the new generation of Metalheads and simply could not be ignored and gave the stagnant scene a desperately kick up the backside. Its influence can not be understated." And with that Heavy Artillery Records from New York have upped the ante as they say with this blast from the past. Originally the "Speed Kills" compilation series, was put together and released by the UK music label Music For Nations (I happen to remember this like it was only last week! Ugh!). With the first record of this series had with it a core of Metal masters the likes of whom, all in the Speed and Metal world desperately tried to emulate and / or surpass for years. Those featured METALLICA, SLAYER, EXODUS, MEGADETH and VENOM! Now what seems like an entire life time later, the burgeoning Heavy Artillery Records has resurrected this long since dead forum and is here to introduce six of this company’s most acclaimed and / or soon to be roster mates. Featuring: MERCILESS DEATH (w/ two previously unreleased tracks), Las Vegas’ AVENGER OF BLOOD who play extremely rough German Thrash (and of whom I could swear nicked some riffs from my old band DEKAPITATOR, as their second song on here the track ‘Affliction’ sounds almost dead on at times to ‘Screams From The Holocaust’ an old demo track of ours), next up is Sweden’s ENFORCER the closest act I have ever heard to ABATTOIR and ARMORED SAINT, followed by Florida’s one man wrecking crew – TOXIC HOLOCAUST, then Italy’s HATRED – All hail the beer can cross! Closing out this CD of Armageddon, the next Thrashing mob of bone breakers from L.A., WARBRINGER. A total of twelve sonic blasts to tear the lining out of your speakers with and assuredly have the cops called – just like in was 1985!! Contact: info@heavyartillery.us or www.heavyartillery.us or P.O. Box 916, Middle Island, NY 11953 U.S.A.