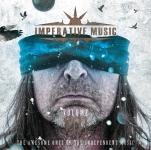 This eighth compilation in the series that usually contains some pretty cool underground as well as wellknown bands is a strange one. It presents a mix of diverse artists who represent different genres. You’ll get Rock in all forms, like ELEPHANT (Brazil) with their mix of Stoner Rock and Göteborg riffing, SECONDS TO END (New Mexico) with a fusion of PINBACK Indie, Boyband Rock, ARCH ENEMY and your average Eurovision Songfestival crap. A NICKELBACK sort of spectacle is served by KINGDOM STONE (Brazil). MARENNA delivers old school Hardrock like EUROPE or BON JOVI. Nu Metal you’ll get from MELTDOWN (Switzerland). METALLICA / VOLBEAT clones by GUILTY AS CHARGED (Belgium) and FALLEN FROM SKIES (Uruguay). I could go on, but better head for the more interesting features. This would be EPICA, OBITUARY, WINTERHEARTH (Canada) and KILLRAZER (Australia). OBITUARY is listed with their track ’Visions In My Head’ of the album ”Inked In Blood” from 2014. ”The End Complete” was the last one I checked and this track made me presume there’s no need to catch up with their later albums. WINTERHEARTH’s contribution ’Speak No Evil’ from their split with ATHANOR was some decent Thrash performed in a rather black execution. Cool discovery. Also KILLRAZER was a nice surprise with an pretty intense Thrash / Death track called ’Seven Years’. As you’ve already guessed, there’s not too much you’ll fancy but maybe the later mentioned bands are worth your attention. Also, regarding the other compilations in the series you could easily assume there’s something been wrong in the process of this volume. It just doesn’t make sense… Anyway, check for yourself on www.imperative-music.com, www.facebook.com/imperativemusicpromotion