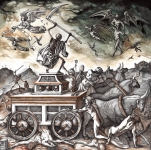 PROFANER brings the sound of the traditional old school Death Metal with their track ‘House Of Usher’. The track is taken from their 2014 EP “Ultratumba”, a fantastic opener which sets the mood for this compilation. I’ve mentally added this band to my list to explore further. Next in line is ‘Illusion Of Faith’ by DAEMONIC, another fantastic dungeon Death Metal sound with thunderous guitars and vocals that fit right in. Seemingly harmless but DAEMONIC delve deep into the pit only to resurface with an ugly track taking this compilation a notch higher. This track is taken from their 2014 split with POISONOUS. We now move onto Brazilian INCRUST who enrich this CD with ‘The Graveyard Calls’ taken from their 2016 EP with the same title. We move to a notch lower in the sound embracing the traditional horror riffing which embraces the atmosphere. Mixing the sound with elements of Doom, INCRUST delivers a lo-fi horror short story to fit into your day perfectly. No it isn’t a weird amalgamation of sounds, it’s just the slow, muddy approach that casts a spell. Following INCRUST is PUTRID YELL, a Death Metal band from Chile which is just downright dirty. The riffs are muddled while the drums collide with the said ugliness with no remorse. ‘Desire Of Death’ is delivered with no mercy! Moving on to EVOKED TERROR who are another swamp resident which takes us through the occult embraced atmosphere. I quite like this sound, the guitars are simple and the production is as you expect. ‘Spirit Of A Nameless Tomb’ reeks of dark energy throughout. Next is EMINENT SHADOW, a Brazilian veteran who’ve been around since 1994. ‘Psicostasy Of Death’ is such a mature track, the guitars gently drift in the background while the drums simply support the devils vocals. In addition, I quite like the name of this band! If you don’t know them, you must definitely check them out. Now we have UNAUSSPRECHLICHEN KULTEN who take their name from the title of a fictional book by H.P. Lovecraft. They’re another band from Chile who’ve been pretty visible internationally. A fantastic well rounded H.P. Lovecraft influenced band who ensure their sound reflects the morbidity of the writings and the vision. If you’ve not come across them, I highly recommend these guys, no-nonsense and pure adrenaline through and through. We immediately move on ‘Unmerciful Coronation’ by POISONOUS which opens with a sci-fi sound to introduce the band’s version of Death Metal, however, POISONOUS immediately ditch the impact of the intro and move to an all round mortar assault. The track was released in 2016 as part of their “Coronation” EP. GODLESS from Chile are very popular in the underground scene for being relentless and executing their vision with insane precision. Taken from their 2017 EP “Omega Omnipotens” this is perhaps a standout in the compilation, pure uncompromising energy! Takes you right back to the late 80s early 90s sound with thumping bass and chuggy riffs. EVIL PRIEST’s ‘Black Seeds… Of Creation’ is taken from their 2018 EP, a gentle descent into the darkness accompanied by black coffee! EVIL PRIEST sounds exactly like what you’d expect from their name. Moving on to ‘The Power Of Darkness Compels You’ by EMBALMED SOULS takes us a level lower in terms of sonic experience but the band makes it all up with their delivery! Expect a traditional Brazilian underground Death Metal attack here, nothing more, nothing less! ANCIENT CRYPTS immediately address the concerns of devolving atmosphere and jump right into the war path with ‘An Amorphous Symphony Of Accursed Flutes’ from their 2020 EP, the band is just on a nitro boost from the get go! Must be a killer live band with clear influences from the first wave of Death Metal sounds. The penultimate track ‘Sepulchral Rites Of Damnation’ by HELL TREPANNER is an atmospheric Death Metal track that checks off all boxes, got to check this band out! Now, last but not the least, the giants of Brazilian Death Metal HEADHUNTER D.C. who’ve been around longer than most know are represented on this compilation with one of their good tracks ‘And The Sky Turns To Black’, this is just pure witchcraft added to Death Metal. This is a phenomenal compilation featuring some stellar bands that all fans must know, recommended, get a copy! For more information please visit www.facebook.com/cryptsofeternity