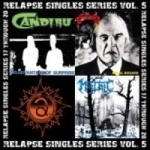 The great Relapse Singles Series has already reached volume 5 by now, this time featuring the EPs by CANDIRU ("Disadvantage Of Surprise" – 2 tracks), MORTICIAN ("Mortal Massacre" – 3 tracks + intro and outro), AFFLICTED ("Wanderland" – 2 tracks) and MYTHIC ("Mourning In The Winter Solstice" – 3 tracks + intro). All of them originally got issued on 7" vinyl format via Relapse between 1992 and 1993 and at least three of the bands turned into quite known underground names ever since. I don’t think I have to introduce the ultra brutal gory Death Metal by MORTICIAN to anyone reading this as the band put out serveral albums and EPs ever since, so let’s focus on the other acts. Sweden’s AFFLICTED originally started out in 1988 as AFFLICTED CONVULSION, recorded three demos under that name and shorted their name to AFFLICTED in 1990. Two more demos, as well as a 7" via Thrash Records and a full length on Nuclear Blast in 1992 ("Prodigal Sun") were about to follow before they switched styles from complex Death Metal to Power Metal (perfectly reflected on their second album "Dawn Of Glory", which came out via Massacre Records in 1995). The 2 songs on offer here still date back to their Death Metal period and were taken from the 4 song "Wanderland" demo (Nuclear Blast did release the other two songs on another 7" entitled "Rising To The Sun"). Their overall sound is based on the typical SweDeath from that time (Sunlight Studio), but like I already mentioned, as a whole way more technical and partly kinda weird. I suppose this lack of catchiness was probably one of the reasons why they never gained a similar status as many of their fellow country men. MYTHIC evolved out of the ashes of DERKETA, an all female, yet extremely brutal Death Metal band from the US. Musically there wasn’t really a big difference between DERKETA and MYTHIC and therefore their material should easily please everyone into straight forward, honest, midpaced brutality… Feelingwise really close to the early 90s bands from the NY / NJ area, which they also pretty often shared the stage with back in those days. The least known act to me on this fifth edition is definitely CANDIRU. No surprise, cause musically they don’t really appealed to my taste at all. Formed in the early 90s in Harrisburg, PA and influenced by Industrial acts such as GODFLESH, G.G.F.H., SKINNY PUPPY or COIL this two-piece consisted of Kipp A. Johnson (bass, drum programming, sampling and lyrics) and Patrick McCahan (guitar, vocals, sampling). Throughout their existence they put out one demo, a 7" EP, a split EP (with FAT HACKER) and a full length ("Unloved And Weeded Out"), to be followed by a compilation of unreleased material in 2004 (after the duo had already been history for a while). As I’m not into industrial sounds, I better not comment on their two songs on here. But I suppose that genre lovers might really like this… CANDIRU’s Patrick is now the head of Red Stream Records (in case you’re interested in some gossip). So, all in all also volume 5 of this sampler series offers some cool gems from the history of an extreme, yet very unique company again! For all further info check out www.relapse.com