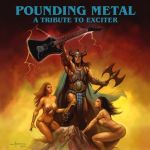 During the past more than twenty years, there were a felt bazillion albums that paid tribute to more or less important bands. But as far as I remember, there was not any tribute to EXCITER yet. Why that? EXCITER was a very important band for the evolution of Speed and Thrash Metal in the early to mid 1980s and released some worthy albums in their later career as well. The heavy sound of the Canadian three piece was somewhere on the edge of Speed and Thrash and along with METALLICA and their country mates ANVIL, EXCITER were the kick start for the things that developed in North America only few years later. Unfortunately, the two Canadian acts never gained the attention, not to mention the success of METALLICA. So, it is time not only to praise ANVIL, but even more to put the name EXCITER back on the map of today’s Metal. Skol Records took charge of this with a compilation called “Pounding Metal”. The list of bands that take part in this adventure reads pretty interesting, since all of them can be seen as real or true Metal bands, who should be more or less influenced by EXCITER. Additionally, the tracklist consists only of stuff from the early times of the band which means that all the songs on this compilation are at least 30 years old. So, anything is prepared for a Metal feast. It should be no surprise that all of the cover songs here are pretty close to the original versions, so there’s no really new shade to the sound of EXCITER. And nearly any band does at least a good job in reproducing the originals. Some of the songs stand out anyway. EVIL INVADERS did a very furious version of ‘Violence & Force’, German MASTERS OF DISGUISE transferred ‘Black Witch’ in the present days in a very fine way and what SAVAGE MASTER made of ‘Saxons Of The Fire’ is very cool, too, thanks to the great vocal delivery of Stacey Peak. But it’s OCTOBER 31 who really took the cake with a version of ‘Stand Up And Fight’ that nearly beats the original. These guys definitely have a feeling for Metal. Another medal of (more than) honour goes out to the US Power Metal outfit VISIGOTH. ‘Rising Of The Dead’ turned out to be a melodic and powerful smasher after their treatment. Oh, and I should not forget to mention German VULTURE for choosing the rather rare ‘Feel The Knife’ and treating it very well. The US legend ATTACKER (‘Cry Of The Banshee’) are the only contemporaries of EXCITER on “Pounding Metal”, yet their performance is as “okay” as those of RANGER, GATEKEEPER or IRONSWORD, who at least get kudos for having chosen the unexpected compilation tune ‘Death Revenge’. If you’re already into EXCITER, this record might be a nice one, especially since it’s done with style. And those who don’t know EXCITER yet should immediately check out their first three albums “Heavy Metal Maniac”, “Violence & Force” and “Long Live The Loud”. These are the records on that these songs can be heard in their original version, the classic masterpieces from EXCITER. Before I leave you, I just want to ask one final question: what the fuck does this awful cover artwork in MANOWAR style have to do with EXCITER? (well, I guess EXCITER’s "Long Live The Loud" cover artwork might have been an inspiration on it – Frank) For an answer to this question (maybe) or more info (definitely), check: www.skolrecords.com