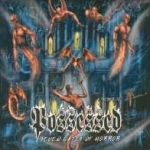 It’s f.i.n.a.l.l.y. done!!! I have no idea what actually caused all the delays of this tribute and why it’s not Immortal Records from Poland that put it out in the end, but I couldn’t care less! Luckily Holland’s Karmageddon Media (formerly Hammerheart Records) took care of the whole project and apart from some minor letdowns the result is definitely worth the long wait! 13 bands in total are praising the godfathers of Death Metal, all (!!) of them should be known to you and with a few exceptions their versions of POSSESSED’s musical legacy is mostly surprisingly cool. Some of the stuff is already known from the individual band’s own releases, but it’s generally still a cool thing to listen to those tracks again, and to worship "Seven Gates Of Horror" in its entirety now. My personal letdowns come from VADER (‘Death Metal’), a band which I really can’t stand at all anymore for quite a while already, as well as DIABOLIC (‘No Will To Live’) and ABSU (‘Swing Of The Axe’), both mainly because of a shitty production. The remaining songs by AMON AMARTH, HOUWITSER, KRABATHOR, ANGEL CORPSE, SINISTER, GOD DETHRONED, PENTACLE, IMPIOUS and especially CANNIBAL CORPSE (!!) and of course SADISTIC INTENT (featuring Jeff Becerra himself on vocals) were all done with dedication and should always please fans of early POSSESSED and the particular bands alike. I’m not quite sure (as I currently only own a promo version with no detailed info included), but from what Jeff Becerra told me a while ago, the tribute’s artwork could be based on the original cover design which was to appear on "Seven Churches" (it at least it has several elements of it…). So, this is definitely one of the better tributes around and absolutely worth checking out!