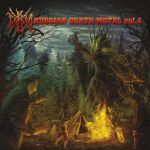 The Russian Metal scene is enormous. There are so many bands overthere, many of them which never reach our ears, as they drown in the noise, as many other bands do as well, due to the heaps of demos, EPs and albums being released, both physically and online all the time. Darknagar Records and Satanath Records have set a mission though, and that is to enlighten our horizon towards East, so we can hear some of all the bands from Russia and Eastern Europe. Here we have volume number four in the Russian Death Metal series, a compilation with 18, for me, unknown bands, and here as I thought I had little knowledge of what was going on, over there. This compilation took me back to the good old days, where tape compilations were found everywhere. And there were some quite good ones being released from the Eastern European countries, where you usually got some gnarly American Death Metal demo tracks, from the upcoming bands of that time, and a good deal of local heroes. And it was quite evident how the technical revolution hadn’t hit overthere back then, and musically the bands were often a step or two behind as well, even though there were some killer tunes amidst it all. This compilation does also have quite some gaps between good and bad, and it is the latter who carries most of the weight on here. I reckon there is a lot of young bands on this album, as the music and the songwriting doesn’t seem that mature and worked through. 3 bands that stands out and deliver some good music are as follows. First AUTUMN AURORA, which deliver a quite good atmospheric and melodic tune with ‘Serinity Dies’, though it is just a tad too long, clocking in with 9 minutes. MARBLE CARRION delivers an intense fistful of midpaced traditional Death Metal, with some good vocals and some great guitars, ‘Smell Of Napalm’ is a quite enjoyable track. ATRAHASIS delivers interesting dark and wicked Death Metal, heavy with an raw production, low eerie vocals, guitar leads in a high tone, hypnotizing rhythm patterns and a good deal aggressivity on top of the blackend brutality, a band that will be interesting to follow. "Russian Death Metal Vol. 4" does not offer that much interesting to the table in my opnion, there are a few highlights, and that’s it, the rest is too poorly delivered or the songs just doesn’t have power, though with the amount of bands, there is hope that a few will develop into something hard hitting along the way. Until then my favorite Russian Death Metal squadron will remain GROND. More info here: www.darknagar.ru, www.satanath.com