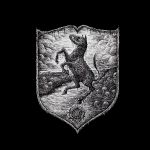 What might happen when two German Death Metal enthusiasts meet, get friends and have a drink or two? Sometimes something special, I’d say, like in this case. Long time friends Leimy from Redemption Of The Rotten Records and Marc from Suffer Productions joined forces after having a beer or two together, going into raptures over the good old Death Metal compilation albums of the early 1990s and deciding to release a sampler album together. But instead of putting together an international compilation, they decided to concentrate on bands from their home area, the vivid Death Metal scene in the German federal state North Rhine-Westphalia. The result is called “Hymns Of Eternal Decay – A NRW Death Metal Compilation“ (NRW being the typical German abbreviation of the federal state) and it’s very attractive for lovers of old fashioned Metal of Death in its different directions. 15 bands with 15 exclusive tracks give the listener an overview of the scene, some names well known to these pages, some not, some others left out. Of course not all that glitters is gold, but the level of quality is damn high for sure. My personal highlights on “Hymns Of Eternal Decay” are the contributions of CRYPTS and LIFELESS. The Münster based four piece CRYPTS offer us ‘Necropolis’, a damn fine crusher, very tight and diversified with a great dark and doomy part towards the end. And LIFELESS finally have new stuff ready with ‘Beyond The Veil’, a song that keeps up the high level of the band and comes along rather melodic. A more than honourable mention go out to ABSCESSION with ‘Litany Of The Serpent God’ that reminds of Swedish Death Metal with some MEMORIAM, due to a decent influence of Hardcore / D-beat, and THE INFERNAL DECEIT who offer some damn fine Death with a distinct Swedish note on ‘The Divinity Of Forsaken Idols’. Also the songs from the bands of the originators of “Hymns Of Eternal Decay” deliver fine stuff. Marc’s band DEPRESSION is already a well known name in Grindcore and contributed ‘Grabeskälte’, a surprisingly Death Metal styled song, groovy and fine, while Leimy’s RECKLESS MANSLAUGHTER did a bold cover of the classic ACCEPT song ‘Restless And Wild’ with some ultrafast drumming. ABYTHIC (‘Retaliation Conquest’, with a driving beat), DENOMINATION (‘Götzendämmerung’ with thrashing UNLEASHED riffing), DEUS INVERSUS (‘Between The Heaven And The Underworld’, melodic and complex US Death styled stuff) and WITCHTOWER with the rather rocking ‘The Dead And The Scythe’ also caught my attention. The contributions of DEPRAVITY, HERETIC WARFARE, RESURRECTED, SELFDEVOURED and SUFFOCATE BASTARD are also a bit of all right, yet they can’t keep the high level on “Hymns Of Eternal Decay” completely. But in sum, this compilation is a very fine one and there are a lot of new bands to discover and exclusive tracks from the bands one might know. The hard copies are limited gems all the way, as there’s only an edition of 500 CDs in a slipcase made, with fine art work. For more information visit www.facebook.com/hymnsnrwdm or https://hymnsofeternaldecay.bandcamp.com