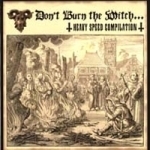 This is not exactly a compilation album, but a four-way split EP that originally even was meant to become a 7". But as time went on it finally turned into a 10" with a pretty impressive packaging (the main title on the front-cover got printed in embossed black letters, the subtitle in silver letters, the first 200 hundred copies are pressed on coloured vinyl and include a massive MINOTAUR patch)! There’s four bands on this vinyl-only release, and all of them supplied excluvive recordings for a common goal, which is old school Thrash Metal! Germany’s MINOTAUR are probably the most popular act on here and due to their long lasting history should be pretty much known to everyone into "Endless Pain" – era KREATOR, cause that’s exactly what their cool contribution ‘Mass Suicide’ recalls. Joel Grind, the only member of Maryland’s TOXIC HOLOCAUST, delivers a very fine death thrashin’ outburst entitled ‘Army Of One’, which is one of my favorite tracks on offer here (the other one being ‘Thrash Nightmare’ by Finland’s EVIL ANGEL). That’s what I call raw, old school Thrash straight from the heart! No fuckin’ retro overtones here! I really would like to hear more material by both of ’em! On the other hand, I could easily live without Switzerland’s GOAT MESSIAH though, at least when I have to judge them by their lousy countribution to this 4 tracker here: ‘Rape, Kill, Destroy’ is nothing but ridiculous, mainly due to the annoying vocal delivery. But all in all this is a very cool project though that you can easily support yourself by ordering a copy for cheap $5.00 (world): Midnight Records, P.O. Box 340236, Sacramento, CA 95834 – 0236, USA, email: chemikill@hotmail.com.