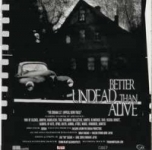 Not bad for a record company compilation, not bad at all! Code666 put together 24 more or less unreleased songs (rough mixes, rare tracks and exclusive stuff) that are supposed to create an album that also works as a unit – despite all those different bands. And, indeed, the music is floating – every new song neatly fits in its place. The sampler features bands such as ABORYM, RAKOTH, BLOODSHED, MANES, NEGURA BUNGET or AGHORA (feat. CYNIC members Sean Reinert and Sean Malone). A broad variety from (Industrial) Black or Death Metal over sort of Folk and Medieval Metal to jazzy Progressive Metal. My faves are the proggies AGHORA and ATROX (both with female vocals), THEE MALDOROR KOLLEKTIVE, ENID (a bit like FALCONER), VOID OF SILENCE and NEGURA BUNGET. You see, the list is getting longer and longer while I’m typing. That’s because there is something for almost every mood, besides, the sampler puts you into the right mood anyway, you don’t have a choice. Finally, the second CD contains a multimedia section like a complete MP3 live performance by AGHORA in Florida, a NEGURA BUNGET video shot in the Carpathian mountains in 2001 and a hidden game (haven’t found it yet). The first one to win the game gets a free life-time subscription of all the code666 releases! The more I listen to "Better Undead Than Alive", the more I use the multimedia section and the more I think about it, the more I’m sure I can recommend this compilation to you whole-heartedly. In case you’re a little open-minded in terms of Metal you’ll recognize that code666 do have a couple of jewels that avoid the paths of the masses. www.code666.net.