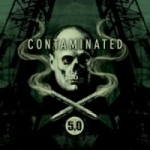 I don’t do label promotion usually (because to me, only the musicians count), but I can only admit that Relapse Records could be seen as the home turf of some of the most interesting, mind challenging and intriguing bands of today. In fact, the majority of the artists hosted by Relapse bring a bowl of fresh air to the poor of us who are polluted by second rate so called "extreme" bands! And this mammoth of all samplers (45 tracks on a specially priced two CD set, let’s simply talk about value for money!) proves that with ease. Among the bands featured here, all are not that interesting of course. For instance, the track ‘Warm Hands, Cold Heart’ by the band 27, with its Björk-like atmosphere, got pretty severely on my nerves. And what can we think about the noise bringers of HALO, except that their "music" seems inaccessible to the basic Metal fans? Fortunately "Contaminated 5.0" offers enough interesting tracks to content us. My favorite ones come from bands like MASTODON (with the fantastic ‘March Of The Fire Ants’ taken from their debut), ALCHEMIST (experimental Heavy Death Metal from Australia, complex music and unusual arrangements, a band worth to be checked for!), HIGH ON FIRE (a big surprise, they play Heavy Doom with a plenty of influences from the 70s) and of course PENTAGRAM (with a song taken from "First Daze Here", reviewed elsewhere in this zine; I beg Relapse to grace us with a volume II very fast! I can’t wait!). The second CD of this set is more oriented towards regular extreme bands like ORIGIN (featuring ex – ANGELCORPSE John Longstreth), MORTICIAN or SUFFOCATION, and this is a little less interesting to me except for the song from CEPHALIC CARNAGE, this one being incredible! Well, you understand it is nearly impossible to review all the material on offer here, and I think getting this sampler is mandatory anyway to expand one’s musical horizon. I salute publicly the high quality of a label able to break musical barriers while staying true to the roots of extreme Metal. Such integrity is rare enough these days to be but loudly praised, don’t you think? Essential, and I could not have imagined saying that about a sampler! DILLINGER ESCAPE PLAN fans should note that an exclusive live track is featured here, just to add a little more interest to an already class release!